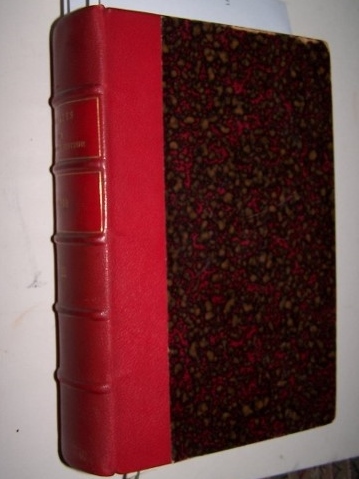 2 p.l. & 1020 pages; Contemporary binding, red half morocco over marbled boards, five raised bands on the spine, title, date and volume number lettered directly in spine panels in gilt, top edges lightly marbled to match the marbled endpapers. Just a hint of light rubbing at the edges and corners; clean and handsome. This 1908 volume contains a significant article by the co-founder of modern immunology, published in the same year that Metchnikoff was awarded the Nobel Prize: E. Metchnikoff, 'Etudes sur la flore intestinale' [pp. 929-55]. This important paper appeared in the same year during which lie Metchnikoff and Paul Ehrlich were awarded the 1908 Nobel Prize in Physiology or Medicine "in recognition of their work on immunity." Metchnikoff, (whose name is also now transliterated as Ilya Ilyich Mechnikov) was born near Kharkov in 1845. After studies in Russia and Germany, he held academic appointments in Odessa and St. Petersburg, but left Russia in the 1880's as a reaction to political turbulence. Metchnikoff went to Paris seeking advice from Louis Pasteur, who responded by appointing Metchnikoff to a position as the Institut Pasteur, where Metchnikoff remained until his death in 1916. Other papers of interest in this year include a prescient paper concerning diabetes by the Belgian clinician Jean de Meyer, who would give insulin its name in 1909, the year after his paper ('Glycolyse, Hyperglycemie, Glycosurie et Diabete') was published in this volume. Contents also include -- Nicolle and Pozerski: 'Une conception gnrale des anticorps et de leurs effets.' Recherches sur la Flore intestinale normale des enfants...' by Henry Tissier. "De L'Anaphylaxie et des toxognines" by Charles Richet [who was awarded a Nobel Prize in 1913 for his work on anaphylaxis]. And a three-part paper by M. Auguste Trillat: 'L'aldehyde acetique dans le vin, son origine et ses effets...' There is also a tribute, (with full-page gravure portrait from a photograph) to Charles Edouard Chamberland, who died May 2, 1908. Chamberland had worked closely with Louis Pasteur. His fortuitous negligence led to one of the major discoveries in the history of medicine. [Pasteur had requested, some time in 1880, that Chamberland inject some cholera specimens into chickens... Chamberland went on vacation, having forgotten to perform this routine task. Upon his return, Chamberland saw the jar of cholera bacteria sitting on the side of his desk and decided, even though his cholera preparation had been exposed to air for a couple of weeks, to inject this slightly aged specimen into the test chickens anyway. Chamberland was surprized that his chickens did not get sick and die, as expected. He told Pasteur of this result, and Pasteur directed Chamberland to inject the same chickens with fresh cholera. Now, to the amazement of both men, the chickens did not die, even confronted with what was clearly a fresh (and fatal) dose. Even when the fresh dose was repeatedly injected in these fortunate chickens, they remained healthy. Through this happy accident, Pasteur and Chamberland had discovered that a weakened form of a disease might serve as an effective vaccine. Chamberland also invented a porcelain filter the tiny holes of which would filter bacteria out of any solution -- this filter is still used today in labs throughout the world, and bears Chamberland's name. Text in French; 14 full-page color lithographic plates at the end.