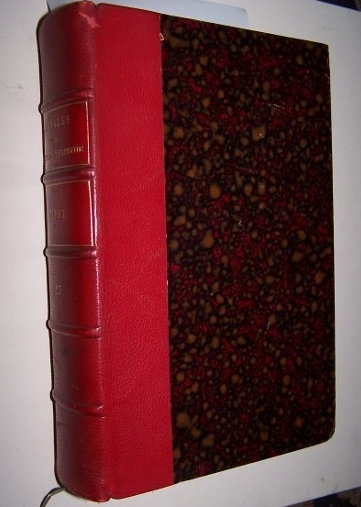 2 p.l. & 868 pages; Contemporary binding, red half morocco over marbled boards, five raised bands on the spine, title, date and volume number lettered directly in spine panels in gilt, top edges lightly marbled to match the marbled endpapers. Just a hint of light rubbing at the edges and corners; the binding is clean and handsome. The first gathering of the text (pp. 1-16) shows a short, internal break in the paper -- (this appears to have been minor damage to these leaves before, or during, binding. No text is lost, and since the short tears do not extend to any edge of the affected leaves, it is not likely that any subsequent damage will occur during this copy's second century of life. There are two papers in this 1903 volume of sufficient lasting significance to earn entries in the latest edition of the Garrison-Morton (Norman) Bibliography of the History of Medicine. lie Metchnikoff and mile Roux : "Etudes exprimentales sur la syphilis. Premier mmoire"pp. 809-821. [G-M 2398]. "Metchnikoff and Roux successfully transmitted syphilis from man to the higher apes. Although not the first to do this, they recorded much new information concerning the disease." Metchnikoff was awarded the 1908 Nobel Prize (with Paul Erlich). Pierre Paul mile Roux [1853 1933] was one of the closest collaborators of Louis Pasteur, starting when the younger man was 25 years old, in 1878. Roux worked worked with Pasteur on avian cholera (18791880) and anthrax (18791890), and was responsible for the Institut Pasteur's production of the anti-diphtheria serum, the first effective therapy for the disease which had killed millions over the centuries, particularly children. In the year after this paper written with the great lie Metchnikoff appeared, Roux became director of the Institut -- (a position first held by Louis Pasteur himself). The other G-M title is mile Marchoux (1862 1943); A. T. Salimbeni and P. L. Simond -- 'La fivre jaune.' pp. 665-731 [G-M 5459] From 1901 to 1905 Marchoux worked with Paul-Louis Simond (1858-1947) and Alexandre Salimbeni (1867-1942) in Brazil researching yellow fever. During this period, Marchoux and his colleagues were successful in eradicating the yellow fever epidemic from Rio de Janeiro, through the use of an effective convalescent serum. Marchoux was appointed head of "tropical microbiology" at the Pasteur Institute in 1905. In later years, he was also known for tireless efforts to assist and relieve victims of leprosy. There is also a major article signed at the end by mile Duclaux, Director of the Institut Pasteur and official publisher of these Annales -- "L'Alcool & ses droits naturels" -- pp. 770-808. Duclaux had been the first to observe the direct formation of alcohol from sugar by means of the action of alkalis, in 1886. This 1903 article appears to have been a major salvo in a controversy between Duclaux and Laborde (among others) concerning alcohol. Laborde observed that Duclaux treated alcohol as primarily a food, but held that it is, instead, a drug. Indeed, Duclaux, while not unaware of the difficulties caused by overuse of alcohol, saw it as not only a food, but as a particularly efficient store of energy and calories for human consumption. (The discussion continues...) Text in French; there are seventeen color lithographic plates at the end, including one full page depiction of a sad looking chimp who was made to sacrifice his health for lie Metchnikoff and mile Roux's ground-breaking research.