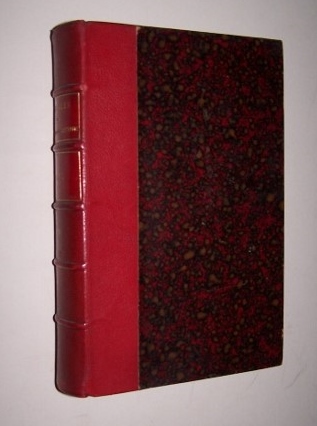 2 p.l. & 780 pages; Contemporary binding, red half morocco over marbled boards, five raised bands on the spine, title, date and volume number lettered directly in spine panels in gilt, top edges lightly marbled to match the marbled endpapers. Just a hint of light rubbing at the edges and corners; the binding is clean and handsome. Contents of 1904 include parts two and three of lie Metchnikoff and mile Roux's important series on syphilis: ( "Etudes exprimentales sur la syphilis." Deuxieme memoire [pp. 1-6] & Troisieme memoire [pp. 657-671, with 2 color plates). These articles give further detail of the study of syphilis and its morphology and symptoms as the authors trasmit this human pathogen to chimpanzees and other primates. (Garrison-Morton 2398). There is a significant article on an early clinical use of X-rays, in this case used against ringworm, by Raymond Sabouraud (1864-1938). The treatment outlined here is still known as "Sabouraud's method." ('Les Teignes Cryptogramiques et les rayons X,' pp. 7-25, with b/w photographic illustrations). There is also an instrument named for Sabouraud and the co-author of this paper -- the "Sabouraud-Noir instrument": (A dosimeter that measures the quantity of x-rays via the barium platino-cyanide method). Another article in this volume represents a classic of public health, written by Edmond Sergent and his brother Etienne. Edmond, along with a distinguished team of colleagues not least his brother, directed the Pasteur Institute of Algeria for over 60 years, from 1900 to 1963. The brothers Sergent had been students of Emile Roux. In this case, the brothers Sergent were attacking maleria, not in the tropics, but in the Loire, at Lac de Grand-Lieu -- using the groundbreaking methods directed by Robert Koch's four postulates -- (named, of course, after Robert Koch, the founder of modern bacteriology and the effective study and treatment of infectuous disease, who would win the Nobel Prize in the following year, 1905). The struggle against maleria became a focus of the Institut Pasteur, and the struggle would take Edmond Sergent and his brother far, far from the Loire. Their first article is immediately followed by an account of their anti-malerial campaign in Algeria, also in 1903 ['Essai de campagne antipaludique selon la methode de Koch (Lac de Grand- Lieu 1903)' -- pp. 49-64; followed by 'Campagne antipaludique en Algerie (1903)' -- pp. 64-97.] Another article details studies in another area to which Louis Pasteur turned his team's attentions -- ('Recherches sur les ferments de maladies des vins' -- Pierre Maze and P. Pacottet; pp. 245-266). The heart of the matter, clinically speaking, was the discovery that found that acetic acid could be formed by certain bacteria from alcohol in the absence of air when laevulose is present. Winemakers certainly took note.... Sadly, there is also an obituary with text bordered in thick black rules, of Emile Duclaux, the Director of the Institut, with a full-page portrait engraved from a photograph. There are illustrations throughout, and 9 plates at the end (8 in color lithography). Text in French.