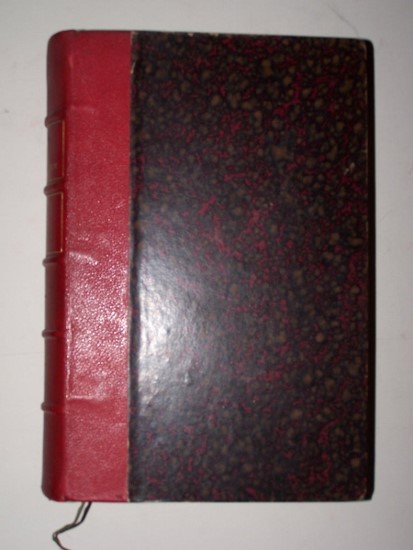 2 p.l. & 9828 pages; Contemporary binding, red half morocco over marbled boards, five raised bands on the spine, title, date and volume number lettered directly in spine panels in gilt, top edges lightly marbled to match the marbled endpapers. Just a hint of light rubbing at the edges and corners; the binding is clean and handsome (with a tiny ding of little consequence along the bottom edge of the rear board). This nineteenth volume of the papers of the Institut Pasteur contain the usual mix of cutting-edge science concerning bacteriology, serolgy, vaccination, and the work towards the eradication of tuberculosis, rabies, maleria, etc. These include the fourth part of an ongoing important series on syphilis: (lie Metchnikoff and mile Roux : "Etudes exprimentales sur la syphilis." Quatrieme memoire [pp. 673-698]. In two short years since Metchnikoff and Roux published the first part of their researches, they state here that the central revelation and insight they brought to the study of this age-old scourge, the successful transfer of this disease from humans to the "anthropoid apes (particularly chimpanzees) was now being done in laboritories throughout the world. The vastly increased understanding from this reserach window into a disease once thought to have been a uniquely human problem bore spectacular fruit in 1905, with the first observations of the spirochete via microscopy, and the development of the Wassermann test for antibodies to a syphilis infection via examination of the blood. There are two articles by the brothers Sergent -- Edmond Sergent and Etienne. Edmond, along with a distinguished team of colleagues not least his brother, directed the Pasteur Institute of Algeria for over 60 years, from 1900 to 1963. The brothers Sergent had been students of Emile Roux. The first of their articles in this volume deals with Trypanosomiasis of camels occurring in North Africa, called locally El Debab. This is caused by blood-sucking flies. The second article by the Sergents concerned their efforts to deal with malaria in Algeria -- (the Sergents first studied malaria in the less-likely venue of a large lake in the Loire; their determined efforts in Algeria would go on for an extraordinary period of nearly six decades. There is an important paper on the venom of the cobra by Fernand Noc, who organized the many venoms of snakes by the nature and speed of their actions on blood. There is an article concerning pulmonary tuberculosis by Albert Calmette and Camille Gurin -- a preliminary work by the pair of scientists who would develop the Bacillus Calmette-Gurin (BCG), a vaccine for immunization against tuberculosis. (Over a century later, this remains a mainstay of the World Health Organization's List of Essential Medicines). But this 1905 volume also contains a series of articles concerning the science of the making of cheese, which still has relevance and substantial influence 110 years later. [Pierre Maz: 'Les Microbes dans l'industrie fromagere' three parts, all contained in this volume]. Traditional cheesemakers had, for centuries, assumed that the process they exploited was an example of spontaneous generation -- Louis Pasteur proved them wrong forty five years before this voume appeared. Milk becomes cheese by means of the action of bacteria. Pierre Maz observed the process via microscopy, and in slide preparations made with scientific rigor and great care. Some of the techniques and agents used in cheesemaking changed in France during the early years of the twentieth century. The color (and almost certainly the taste) of several cheeses, most notably Brie and Camembert, changed during that time. Some modern makers (and fans) of the many great cheeses have second thoughts about some of this, and students of the art should examine Pierre Maz's work. In particular, he is a champion for a traditional baccilus [P. album] the use of which almost universally ceased before the second World War. There are 17 full-page plates at the end, most are color lithographs. Text in French, throughout.