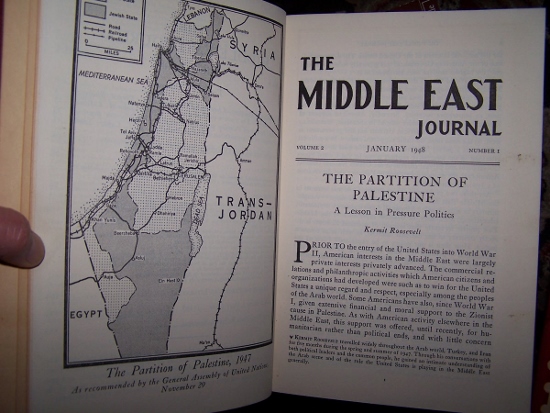 MIDDLE EAST JOURNAL VOLUME II - 1948; 518 pages; Entire year's issues of this journal bound in red buckram with gilt lettering. Articles include The Partition of Palestine by Kermit Roosevelt ; The Legal System of Palestine by Norman Bentwich, Arab Nationalism and Islam by S. A. Morrison, Communist Tactics in Palestine by Martin Ebon, The Iraqi Coup d'Etat of 1936 by Majid Khadduri, Some Aspects of the Arab Dhow Trade by Alan Villiers, The Algerian Uprising of 1945 by Manfred Halpern, etc. Volume 2, Numbers 1, 2, 3, and 4. From the collection of Kermit "Kim" Roosevelt, Jr. (1916 - 2000), the grandson of President Theodore Roosevelt and was the mastermind of the Central Intelligence Agency's Operation Ajax, which orchestrated the coup against Iran's democratically-elected Mohammed Mossadegh administration, and returned Mohammad Reza Pahlavi, the Shah of Iran, to Iran's Peacock Throne in August 1953 for the purpose of returning Western control of Middle Eastern oil supplies.; Experience the pleasure of reading and appreciating this actual printed item. It has its own physical history that imbues it with a character lacking in ephemeral electronic renderings.

Title: The Partition of Palestine / The Iraqi Coup d'Etat of 1936 / Communist Tactics in Palestine