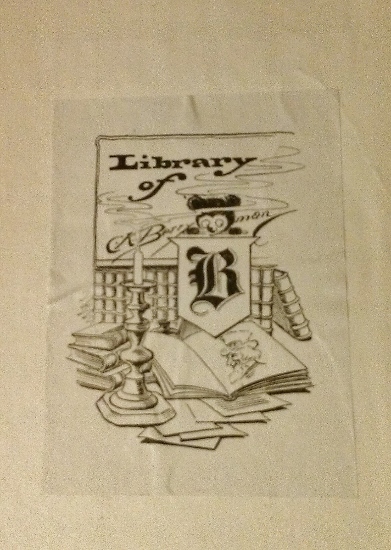 469 pp. & ads pages; The main attraction here is the bookplate, which depicts a little teddy bear peeping over a mock-heraldic crest with a large letter "B" -- and text reading: "Library of C. K. Berryman. The bookplate is mounted in the book The Post-Girl which is clean and tight in the publisher's red ribbed cloth binding. A novel of the relationship between an itinerant musician and a postal worker in a small town in Yorkshire. The bookplate is that of one of the best known political cartoonists of the twentieth century, Clifford K. Berryman, who worked for the Washington Post from 1891-1907, and then for the Evening Star (also in Washington) until his death in 1949. He won a Pulitzer Prize, and his 58 year career, plus the long career of his son Jim, who also drew cartoons for the Star, earned the family's large archive a place in the Smithsonian Institution. But a single cartoon published in the Washington Post in 1902 secured Berryman's immortal fame. In a 1902 cartoon, Berryman depicted President Theodore Roosevelt showing compassion for a small bear cub. The cartoon inspired New York store owner Morris Michtom to create a new toy and call it the teddy bear. Even Roosevelt came to understand that this small, but unforgettable image of the "Teddy" bear would link him and Berryman forever -- the President inscribed a photographic portrait to Berryman ("and the bear" !) in 1904. Of course, Berryman would include his most famous creation in the bookplate he designed for himself. Of the novel itself, the curious may find it worth noting that it won a rave review in "The Dial" upon publication -- (Francis Fisher Browne wrote: "THE POST-GIRL A novel by a new writer, Edward C. Booth. " Establishes his fame at one bound." " Like Barrie at his best.") ; Experience the pleasure of reading and appreciating this actual printed item. It has its own physical history that imbues it with a character lacking in ephemeral electronic renderings.