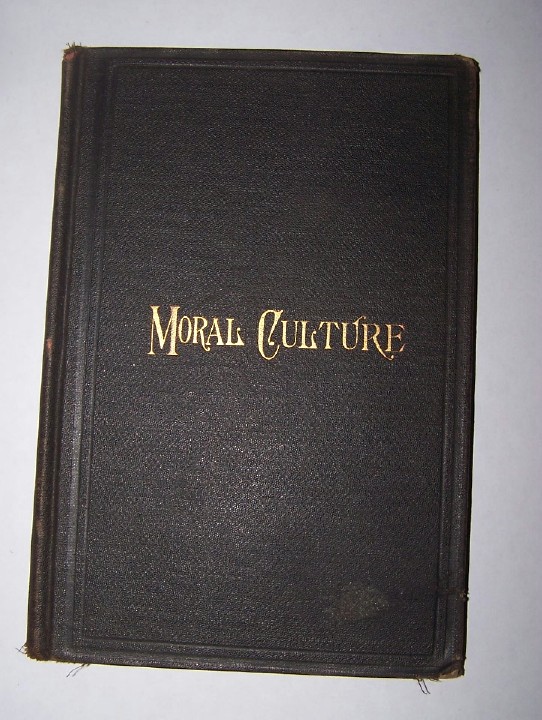 MORAL CULTURE Choice and use of books : Cultivation of memory: from John Stuart Blackie's "Self-Culture"

1 p.l., 71 & iv (ads) pages; Publisher's dark brown cloth, front cover lettered in gilt within a framework of rules in blind, pale yellow endpapers. The title page states: "Engraved in the Advanced Corresponding Style of Standard Phonography, with a Key. Following the running title: "Moral Culture" at the head of page one, the text of pp. 1-39 is set throughout in shorthand letters. The system used is essentially Pitman shorthand, first introduced in 1837 by Sir Isaac Pitman, M.P., and improved many times since. Pitman's system uses a phonemic orthography. For this reason, it is sometimes known as phonography, (meaning 'sound writing' in Greek). Pages 41-71 are devoted to the "Key" set in standard English (with a phrase or two in Greek, befitting John Stuart Blackie's long tenure as Professor of Greek at Edinburgh University. Pitman shorthand was a standard system used world-wide when this small book was published. But two years earlier, in 1888, a new system of shorthand writting was invented by John Robert Gregg, with letters completely based on elliptical figures and lines that bisect them. Pitman uses line thickness and position to discriminate between two similar sounds, but Gregg shorthand uses the same thickness throughout and discriminates between similar sounds by the length of the stroke. This copy has a bold ownership signature on the front paste-down endpaper: "Francis O'Dwyer / Willimantic / Conn / Jan 11th 96." The binding shows very modest wear, mostly limited to rubbing along the hinges and fraying to the corners, with a spot of wax (?) at the lower corner of the front cover. Internally clean and sound. OCLC 16172394 - (apparently locating just the Library of Congress copy). Another edition was published under a title closer to Blackie's original text in Cincinnati, at the Phonographic Institute Co., 1902. ; Experience the pleasure of reading and appreciating this actual printed item. It has its own physical history that imbues it with a character lacking in ephemeral electronic renderings.

Title: MORAL CULTURE Choice and use of books : Cultivation of memory: from John Stuart Blackie's "Self-Culture"

MORAL CULTURE Choice and use of books : Cultivation of memory: from John Stuart Blackie's "Self-Culture"