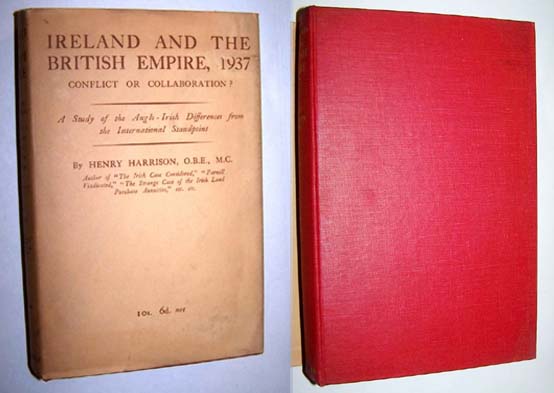 356 pages; Clean and tight in original red cloth binding in dusty, toned dustjacket with light edgewear. OCLC: 4271122 With statistics prepared by the intelligence branch of "The Economist." Printed "With Compliments of Robert Hale and Company" "Sent at request of the Author" laid-in. Also laid-in is an article about the book reprinted from the Manchester Guardian. This book is a well researched and well written plea for the reconciliation of the United Kingdom and the Irish Free State, in view of the looming danger of a European War, in which Irish Hostility would be a serious threat to British security. The author Henry Harrison was an Irish Nationalist, a firend and vindicator of Parnell, he was wounderd in World War I and as secretary to the Irish Dominion League loyally supported the treaty of 1921. He has consistently tried to present the Irish position clearly and fairly to the British people. His exposition of the nature of the Irish Treaty and of Dominion status is elaborate and well argued. Harrison recognizes the impediment of the status of Northern Ireland. He stresses the generosity of the British Parliament to that territory, but also stresses the wrongs of the minority, its lack of power to have grievances remedied and the injustice it suffered under the excessively wide authority of the executive under the Civil Authorities Act of 1922. The Free Irish State must realize that reconciliation with Northern Ireland must be preceded by the restoration of friendship with Briatin. ; Experience the pleasure of reading and appreciating this actual printed item. It has its own physical history that imbues it with a character lacking in ephemeral electronic renderings.

Title: IRELAND AND THE BRITISH EMPIRE 1937 CONFLICT OR COLLABORATION A Study of Anglo-Irish Differences from the International Standpoint