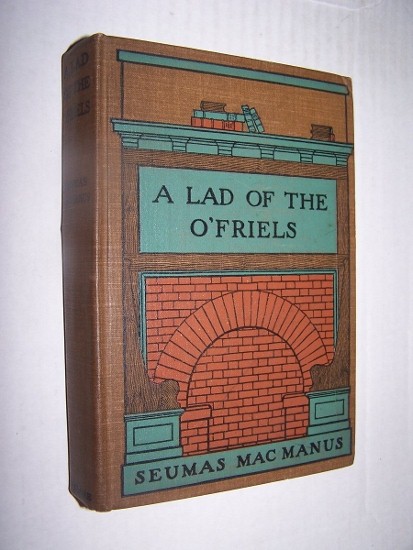 A LAD OF THE O'FRIELS

296, (7) pages; Former owner's name on ffep, otherwise clean and tight in original pictorial cloth binding depicting a brick fireplace with several volumes on books atop the wooden mantle; two very tiny scrapes to edge of front board. OCLC: 27796940 Seumas MacManus (c.1868–1960), was an Irish dramatist, poet, and prolific writer of popular stories, who played an important role in the rise of Irish national literature. Originally from County Donegal, Ireland, Seumas MacManus moved to the United States in 1899. Over the next five decades, MacManus travelled back and forth between Ireland and the United States and became one of the most popular interpreters of Irish folklore for Americans through his collections of tales. Mr. MacManus wrote thirty books and considered himself a "shanachie," or writer in the tradition of Irish storytelling that dates back to that country's antiquity. MacManus died in 1960 at the age of 91. ; Experience the pleasure of reading and appreciating this actual printed item. It has its own physical history that imbues it with a character lacking in ephemeral electronic renderings.

Title: A LAD OF THE O'FRIELS

A LAD OF THE O'FRIELS