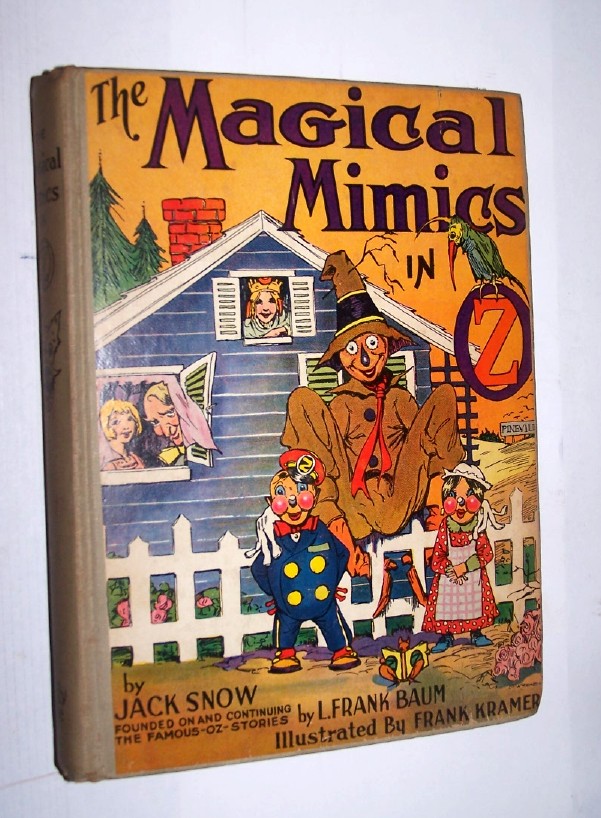 THE MAGICAL MIMICS IN OZ

242 pages; Clean and tight in original light gray cloth binding with colour illustrations mounted on front board. Pictorial endpapers, black and white illustrations throughout. Publisher's name in semi script at spine, endpapers printed in green, measure about 1 1/16" thick. The Magical Mimics in Oz (1946) is the thirty-seventh in the series of Oz books created by L. Frank Baum and his successors, and the first written by Jack Snow. It was illustrated by Frank G. Kramer. Snow based his villainous Magical Mimics on the Phanfasms in Baum's Emerald City. In the eleventh chapter of that book, Baum states that "the Erbs are the most powerful and merciless of all evil spirits, and the Phanfasms of Phantastico belong to the race of Erbs." Snow makes his Mimics another type of Erb; they live within the hollows of Mount Illuso, a peak next door to Mount Phantastico. Like the Phanfasms, the Mimics are ugly and malevolent shape-shifters; they have the additional trick of being able to copy the appearance of humans, simply by stepping into their shadows. People duplicated in this way are paralyzed by the magic, but remain conscious. A very nice example of this wonderful Oz book. ; Experience the pleasure of reading and appreciating this actual printed item. It has its own physical history that imbues it with a character lacking in ephemeral electronic renderings.

Title: THE MAGICAL MIMICS IN OZ

THE MAGICAL MIMICS IN OZ