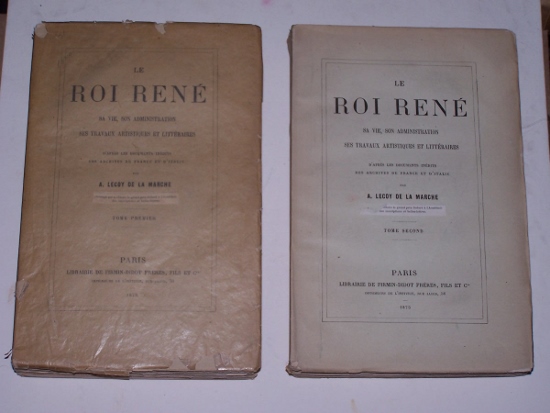 [xvi], 559; 548 pages; Two volumes, in publisher's printed wrappers. A splendid copy of the first edition, in large 8vo format [24 cm tall]. Fore and bottom edges untrimmed. A fresh, clean copy internally, the wrappers are clean and intact, showing just a bit of light toning at the edges and the spines, with a minor closed tear at the top margin of the rear wrapper for volume I. There are tiny printed labels mounted (at the time of first purchase) to the front wrappers announcing that this work had been awarded the Prix Gobert by the Acadmie des Inscriptions et Belles-Lettres. A standard historical reference relating to the life, times and works of Ren d'Anjou -- 1409-1480] -- known as Ren I of Naples and Le bon roi Ren. He held numerous titles over the years: Duke of Anjou, Count of Provence, Count of Piedmont, Duke of Bar, Duke of Lorraine, King of Naples (14351442; titular 14421480), titular King of Jerusalem (14381480) and Aragon (14661480) (including Sicily, Majorca, Corsica). Ren had a long involvement with the arts, and was traditionally thought of as a painter himself. [A letter from the Neapolitan humanist Pietro Summonte to Marcantonio Michiel, of 20 March 1524, reporting on the state of art in Naples, and works there by Netherlandish painters, states that "King Ren was also a skilled painter and was very keen on the study of the discipline, but according to the style of Flanders"]. Some of the attributions of the nineteenth century are now considered doubtful, but there is little question that Ren was a keen enthusiast of painting and the arts and a significant patron, to the extent that his finances permitted. (Ren appears as "Reignier" in William Shakespeare's play Henry VI, part 1, and Shakespeare presents him as something of a figure of satire for his relative poverty, considering his Dukedoms and Kingdoms). Ren married Isabelle, Duchess of Lorraine (1410 1453) in 1420. His first Queen was also devoted to the arts. A romanticised vision of their honeymoon was the subject of famous paintings by Pre-Raphaelite painters Ford Madox Brown, Edward Burne-Jones and Dante Gabriel Rossetti. Readers of the popular novels of Dan Brown and related works will note with interest the allegations that Ren was the ninth "Grand Master of the Priory of Sion." Many institutional holdings of this set, but now scarce on the market. This large two volume set should not be confused with two abbreviated extracts published by the author in 1873 & 1874. This full work from 1875 has text devided into three sections: Histoire politique; Administration; & Beaux-arts et littrature.