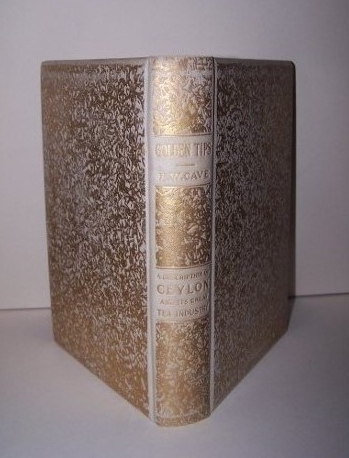 GOLDEN TIPS - A Description of Ceylon and its Great Tea Industry

xii, 474 & [1, ad] pages; Publisher's cream cloth, blocked and stamped in gilt in an elaborate all-over pattern of leaves, slate grey endpapers, all edges gilt. A wonderful copy of the first edition of a handsome book -- of interest both for its subject: tea and its plantations, and the setting: Ceylon, now known as Sri Lanka. A particularly well-preserved copy, with an inscription in ink on the verso of the front free endpaper: "For Annie G. Mawle / a present from / the Author's Sister." The spine is bright and shows neither toning nor fading, the endpapers are clean and fresh, with perfect hinges. The only minor way in which this wonderful copy falls short of perfection is in a couple of narrow bands of very light rubbing to the gilt stamping on the boards (one near the top of the rear cover, and another, even fainter, at the corresponding top of the front cover). Henry William Cave came out to Ceylon from England in 1872 as secretary to the Anglican Archbishop of Colombo, Reginald Coppleston. With some help from his first employer, the author founded H. W. Cave & Co. in Columbo in 1876, when he was 22 years old. Initially, Cave's business engaged in bookselling, particularly supplying books to the tea planters in Ceylon. Henry Cave became a sought after commercial photographer, and then a publisher, and set up one of the most modern printing presses in the subcontinent. He also wrote a number of books about Ceylon (see the interesting ad at the rear of this volume for details of four titles -- there were more, eventually). His firm diversified into musical instruments, sporting goods -- including rickshaws, billiard-tables and bicycles. Eventually, Cave had a motor department, and probably offered motorcycles, as well. The economic impetus for all this development derived from the vast tea business, so well described in this lovely volume.; Signed by Family Member

Title: GOLDEN TIPS - A Description of Ceylon and its Great Tea Industry

GOLDEN TIPS - A Description of Ceylon and its Great Tea Industry