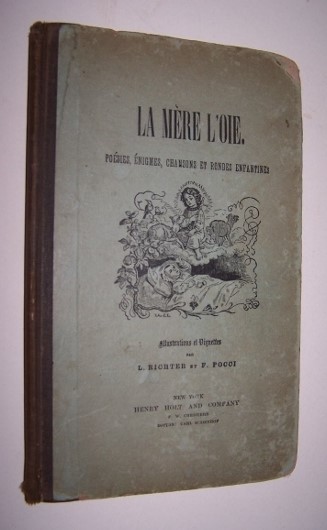 80 pages; Publisher's grey paper-covered boards, with brown cloth spine -- title and illustration on front cover, ads for French books from Henry Holt on the rear cover. Rubbing to the edges of the covers, wear to the spine, particularly at the hinges and edges, and a few very short tears without loss to a couple of text leaves. Neat Christmas inscription in ink on the front free-endpaper dated 1889. This charming American edition of the Mother Goose tales is entirely in French, with b/w wood-engraved illustrations by Ludwig Richter [1803-1884] and Franz, Graf von Pocci [1807-1876]. It appears that there were at least three issues, which can be chronologically arranged by differences in the names of the publication firms. We suggest, tentatively, the following order: 1. New York: Leypold & Holt, S. R. Urbino [see the copy Hutchins Library - Special Collections, Berea College, Kentucky] 2. New York : Holt & Williams, F.W. Chistern ; Boston : S.R. Urbino [see the copy in The Mary Faulk Markiewicz Collection of Children's Books; Rhees Rare Books accession no.: RB-12383 -- University of Rochester; also the Cotsen Childrens Library at Princeton]; and 3. New York: Henry Holt and Company : F.W. Christern ; Boston : Schoenhof. (Such as the copy offered here). By 1870, Frederick Leypold pulled back from his partnership with Henry Holt (more or less to head "Publisher's Weekly"). Between about 1864 and 1870, the Boston firm of S. R. Urbino - a specialist in foreign literature, was gradually acquired by De Vries, Ibarra & Co. After the death of G.H. De Vries in 1870, the firm then was acquired by Carl Schoenhof, one of the firm's employees. Henry James was a fan of Schoenhof & Moeller's Boston establishment, describing it in 1878 as "a vastly better shop than any of the kind in London." Our best guess is that this copy dates from some time between 1873-1880. There are four pages of "Airs" in musical notation on pp. 77-80. The ads on the rear cover of the binding are "Works for the Study of French" from Henry Holt & Co.