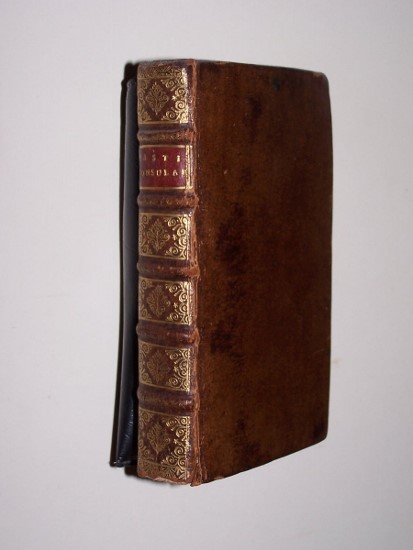 [36], 128, 343, [1] pages; Contemporary full polished calf, five raised bands on the spine, title label on red leather lettered in gilt mounted to the second panel, the others have decorative tooling stamped in gilt, plain endpapers, edges decoratively sprinkled red. A superb copy, missing the edge of the cap to the bottom of the spine (barely noticeable on the shelf) -- and showing only a bit of light rubbing along the front hinge and at the points of the corners. A useful and learned chronology of the Roman consuls. The author, Theodorus Janssonius van Almeloven, was a Dutch physician who also spent considerable time and energy as the editor of various classical and medical works. He was born at Mijdrecht, near Utrecht, where his father was minister of the reformed church. He studied at Utrecht University under a variety of well known professors, and, although he did continue with theological studies at this level, he became convinced that he preferred to devote his life to medicine, rather than follow in his father's calling to the church. He took at medical degree in 1681. Janssonius settled at Gouda in 1687, where he married, and was founder of a learned society there in 1692. Books and bibliography seemed to be in his blood, as his mother had been a sister of Jan Jansson, the great printer of Amsterdam. As an editor, he produced editions with notes of Strabo, Juvenal, Quintilian, the Aphorisms of Hippocrates, Celsus, Apicius, Aurelian on Diseases, and Decker's Treatise on Supposititious Writings. Among his original works were a study in Dutch on the anatomy of the muscles, and several Latin works, including a list of books promised by writers, but never completed or published. His learning was amply displayed by his 1694 work: 'Plagiariorum Syllabus,' in which he listed authors—including biblical, classical, and contemporary writers—who plagiarized expressions invented by previous writers. His list of culprits included a number of big names -- (e.g., Andrea Alciato, Bodin, Calvin, Casaubon, Heinsius, Junius, Justus Lipsius, Petrus Ramus, Claudius Salmasius, Scaliger, and Henry Estienne). The present work is a learned contribution to classical history and chronology. Its status as a reference standard can be inferred from the publication of a second edition in 1740, long after the author's death in 1712 -- (the later edition seems to be less scarce than our 1705 first edition). This wonderful copy, has an important early French armorial bookplate, elaborately engraved to a very high standard, identified with the single word "Charreton" at the bottom of the plate. [See 'French Book-Plates' by Walter Hamilton - London, 1896. Chapter IV: Early Examples - 1574-1650 - page 70]. The Charreton library must have been considerable, as there is a neatly written ink inscription on the front free endpaper, facing the bookplate, which specifies the range and case this volume was to have occupied. There are a few tiny corrections in ink, done with a very fine quill point, useful, but barely noticable. OCLC, alas, has several accession numbers for this scarce first edition, (see OCLC: 41893481 for a list of four copies in England, Germany, and the sole North American copy, at Columbia -- and OCLC: 65541207 for a list of four copies in Dutch libraries). A wonderful book, splendidly preserved, with a fine bookplate from the earliest period of French armorial engraved bookplates. (Indeed, as the book plate connoisseur Walter Hamilton notes, the engraver of the "Charreton" plate mounted to this copy displayed more interest in showing off his skill, than in conveying Heraldic information. One wishes that this plate was one of the handful of copies signed and dated by their engravers. Walter Hamilton assigned its range of dates based on its style).