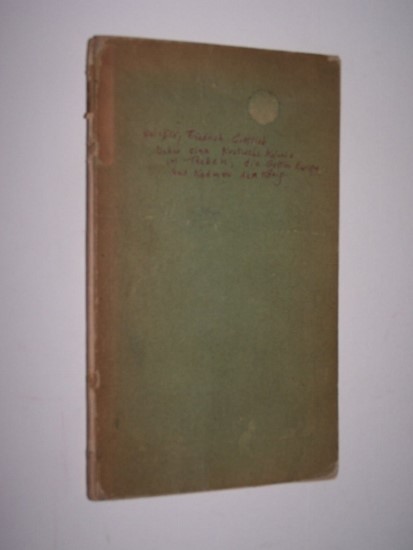 95 & [1] pages; Contemporary green-grey flexible boards, title in ink manuscript on the front board. The front hinge is cracking and delicate, the paper is somewhat toned, and there are a few marginal notes scattered through the text as well as an inscription on the title page -- but generally a good, sound copy of this scarce publication by Friedrich Gottlieb Welcker, who was a significant scholar on the faculty of the newly-established University of Bonn -- (formally named Friedrich-Wilhelm-Universität in 1818, to honor the King of Prussia). In this new post, Welcker established the art museum and the library, where he became the first librarian. Although professor Welcker remained in Bonn for another 44 years, he had been born in Grünberg, Hesse-Darmstadt, and then studied classical philology at the University of Giessen. Due to a lack of funds, he interrupted his studies to take a position as a master in a local preparatory academy, but worked on his dissertation in his free time -- [“Exercitatio philologica imaginem Ulyssis quae in Iliade exstat adumbrans”]. Even with the necessary distractions, he was awarded his Ph.D. at the end of December 1803, when he was still 19 years old. He travelled to Italy in 1806 and took a position as tutor in the Rome household of Wilhelm von Humboldt, who became a long term mentor, friend and correspondent. Back in Giessen, Welcker was appointed the first professor of Greek literature and archaeology -- indeed, he was the first professor in this combined field at any German university. Welcker was quite interested in the politics of his time, and he served in the military during the "War of the Sixth Coalition" in 1814, which resulted in Napoleon's abdication. The young professor's liberalism, leaning towards radical positions, got him in hot water with authorities in Giessen, and he moved on to Göttingen in 1816, and three years later received a chair at the University in Bonn. He was a pioneer of a new sort of scholarship of Greek and Hellenic studies, combining philology and history with parallel studies in art history, religion and literature -- his design was to form as complete a picture as possible of the life and mind of the ancient Greeks. One of his achievements was to help rescue and secure the fragmentary works (and reputation) of the Greek lyric poet Sappho. Another main achievement was his massive 'Griechische Götterlehre' (3 vols., Göttingen, 1857–1862). Many critics consider that this work was the first modern and scientific treatise on Greek religion. Welcker retired from the Bonn librarianship in 1854, and in 1861 from his professor's chair, but labored on to finish his 'Griechische Götterlehre.' Theodor Mommsen (who knew a thing or two about the writing of long scholarly books) joked about Welcker that the gods wouldn’t let him die before he had finished writing their history. Indeed, the gods seemed inclined to take no chances, as Welcker lived on in Bonn until he was 84. See J. E. Sandys, 'History of Classical Scholarship' (Cambridge, 1908), vol. iii., pp. 216–7 for a more detailed assessment of Welckers nature and achievements. This publication, from his early Bonn years, is now scarce in commerce. As is too often the case, there are several OCLC numbers (see OCLC Number: 406581018, etc.)