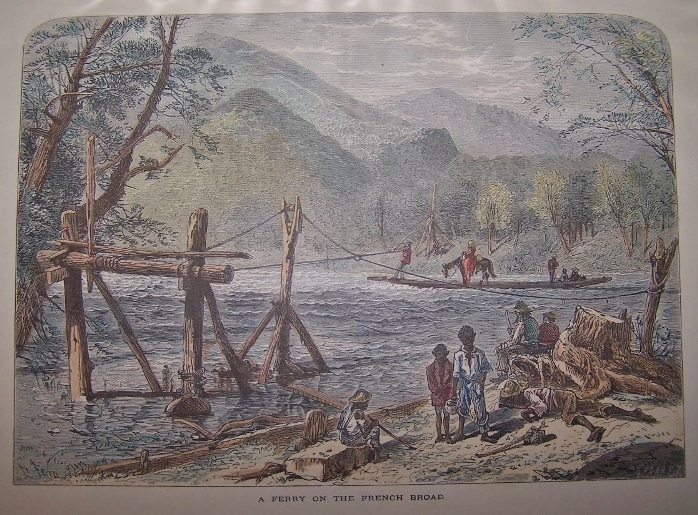 A Ferry on the French Broad [ Hand-colored wood engraving ]

from Picturesque America; Wood Engraving; 1 pages; A beautifully hand-colored engraving of the French Broad River (N.C. and Tenn.) from Picturesque America. Image size 6" x 9" (11" x 14" matted). Matted in white stock with clear mylar. Engraved on wood by John Karst (1836-1922) after a drawing by Harry Fenn (1838-1911) The engraving shows the ferry crossing the river with several passengers, including one on horseback; tree covered mountains in the background and several African American children on the shore in the foreground along with other travelers/observers. From the text: "The ferry itself was antique, and innocent of any but the rudest invention. It was cheap in construction, and the perfection of a simplicity that, so far as any improvement is considered, might have originated among the antediluvians. A rope extending to some convenient tree on either bank; a flat-bottomed boat and a stout negro -- that was the machinery. ... The cable passed through a guide-post attached to the gunwale, and the ferryman, seizing it with a peculiar wooden key, gave it a twist, and commenced the process of pulling his freight to the other side."

Title: A Ferry on the French Broad [ Hand-colored wood engraving ]

A Ferry on the French Broad [ Hand-colored wood engraving ]