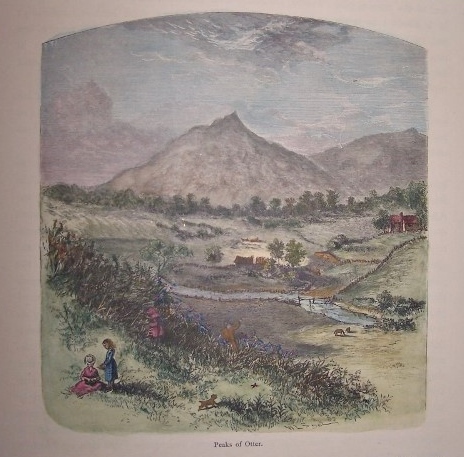 from Picturesque America; Wood Engraving; 1 pages; A beautifully hand-colored engraving of the Peaks of Otter in the Blue Ridge Mountains, Virginia from Picturesque America by William Cullen Bryant. Image measures 7" x 6" (11" x14" matted). Matted in white stock with clear mylar. The mountain peaks are depicted in the river valley with a cabin on a nearby hill and a family gathering berries on the hillside in the foreground. A very charming pastoral scene with the impressive Peaks of Otter at the center. From the text: "The peaks have been made familiar by repeated descriptions. Ten miles distant from [the village of Liberty in Bedford County], the higher of the two is five thousand three hundred and seven feet above the level of the sea."