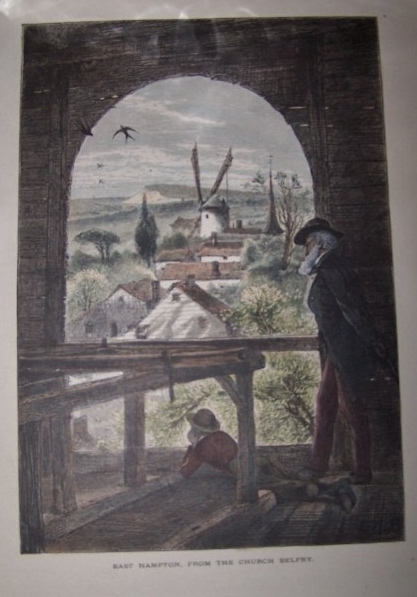 from Picturesque America; Wood Engraving; 1 pages; A beautifully hand-colored engraving of East Hampton viewed from the Church Belfry, Long Island, New York, from Picturesque America. Image 8 7/8 x 6 3/16" (11" x 14" matted). Matted in white stock with clear mylar. Shows a young boy and an old man gazing out of the Church Belft looking across the town with the sea and cliffs in the background. There is another church spire as well as a windmill in the town. Engraved on wood after a drawing by Harry Fenn (1838-1911). From the text: "EAST HAMPTON, a township of Suffolk county, New York, in the extreme S.E. part of Long Island, occupying the peninsula of Montauk, and bounded on the S. and E. by the Atlantic Ocean, and on the N. by Block Island Sound, Gardiners Bay and Peconic Bay. The township, 25 m. long and 8 m. at its greatest width from north to south, has an irregular north coast-line and a very regular south coast-line. The surface is rougher to the west where there are several large lakes, notably Great Pond, 2 m. long. The scenery is picturesque and the township is much frequented by artists. From Sag Harbor, which is a port of entry, a daily steamer runs to New York city."