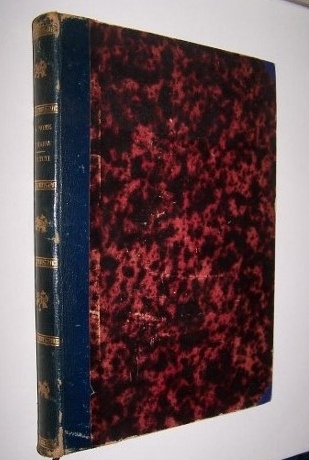 xix, [1] & 131 pages; Contemporary binding: quarter green morocco or roan leather, pressed grain, flat spine lettered and decoratively stamped in gilt, marbled paper-covered boards in red and black, corners tipped in leather matching the spine, green silk ribbon placemark, plain endpapers. Moderate rubbing to the spine and corners, and some chipping to the marbled paper at the edges of the boards -- faint circular stamp of an Austro-Hungarian institution on the front free endpaper, with two numbers in blue and red pencil. One page has minor marks and underscoring in red pencil -- (p. 7). Pius VII, under whose Bull the confraternity of the Sacred Name of Mary was reorganized, reigned as Pope from 14 March 1800 to his death in 1823. Nearly his entire papacy was dominated by Napoleon and the necessity to deal with issues in the Church and the government(s) of Europe created by Napoleonic forces. Born in 1742 as Barnaba Niccol Maria Luigi Chiaramonti, the future pope became a Cardinal in 1785, four years before the French Revolution began. French troops under Napoleon Bonaparte invaded Rome in 1796, taking the previous Pope, Pius VI, prisoner. When Pius VI died in 1799, essentially in French custody, the process to elect a successor was remarkably complicated, for reasons not relevant to this description. It is interesting to note that Cardinal Chiaramonti, who took his papal name in honor of the previous pontiff, found it necessary to wear a papier-mch papal tiara for his coronation, since the French had seized the original when apprehending Pius VI. The new Pope and his envoy to France, Cardinal Secretary of State Ercole Consalve, managed to negotiate the Concordat of 1801 with Napoleon, then First Counsul. Relations were near enough to normal for Pius VII to travel to Paris in order to attend Napoleon's coronation in 1804. He was depicted in Jacques-Louis David's famous painting of this event, seated directly behind the new Emperor, who is depicted in the act of crowning his Empress -- (a task Pius VII had expected to perform). An attendant behind the Pope is shown holding the new Papal tiara, known for all time as the Napoleon Tiara. [It was both too heavy and too small for any normal human to wear, and, just in case any observers missed the point of these problematic facts, the replacement tiara included a jewel or two from the looted original, which came to France with the previous pope]. These difficultes presaged the subsequent devolution of relations between Napoleon and the Papacy. The first leaf of the this book, in its dedication to Pius VII makes clear that the central reason for this reorganization of the "venerabile Archiconfraternita..." was a matter of real estate, specifically the confraterity's titular Church in the north end of the Imperial Fora, just by Trajan's Column. This important part of Rome had led a complicated central role for over fifteen hundred years when the feast of the Holy Name of Mary was introduced by Pope Innocent XI (1676-1689) to commemorate the victory of the forces led by the Polish king, John Sobieski over the Ottoman Turks at the second Siege of Vienna in 1683. Before this battle, Sobieski had placed his troops under the protection of the Virgin Mary; his victory permanently ended the dominance of the Turks in Europe. The Confraterity devoted to the Sacred Name of Mary was founded a few years later, and the first edition of its regulations which are renewed here was published in 1689. The confraternity acquired an old church, which is first mentioned in records in 1418, but was probably older -- [San Bernardo a Colonna Traiani]. After some renovations in the 1690's, the confraternity of the Sacred Name of Mary decided that its new location was really too small. They acquired an adjacent lot and erected a new, larger church built between 1736 to 1741 -- designed by a French architect, Antoine Drizet. Opposite the new church were the back doors of the monasteries of Sant'Eufemia and Santo Spirito ai Monti. Soon before our 1805 book was published, these old monasteries had been demolished for archaeological excavations, seeking to uncover the Basilica Ulpia of the Forum of Trajan. So, at this time, Drizet's domed church overlooked a significant excavation which had uncovered just a few tantalizing Roman bits. Pius VII's attention to this circumstance was prescient, as the French came back to Rome a few years later, (taking the city and also taking Pius VII prisoner). While Pius VII was detained in a series of locations convenient to Napoleon's armies (and highly unpleasant to the Pope and the state of his health), Napoleon's architects were drawing up plans to dig up and rearrange Rome to suit a new grandeur under Napoleonic rule. These plans called for the demolition of Drizet's 1741 church, and a new plaza with Trajan's column at its center. Fortunately, these plans were not yet executed by 1814, when Napoleon's forces encountered substantial reverses and Pope Pius was rescued and restored to Rome. It should be noted that Pius VII was a cultivated man, fluent in at least four languages, a lover of old books and manuscripts (greatly to the benefit of the Vatican Library) and generally a fan of sensible archeological investigation. Specifically, he sponsored excavations in Ostia which revealed ancient ruins and icons; restored the Arch of Constantine; and ordered the construction of fountains and piazzas and erected the obelisk at Monte Pincio. This book is now rare; there are three single copies located in the OCLC World Cat... unhelpfully, each has a separate number. [See OCLC Number: 81864670 -- Harvard, Houghton Library; OCLC: 43534753 -- Univ. of Dayton, Roesch Library; and OCLC 249972563 -- Staatsbibliothek zu Berlin - Preuischer Kulturbesitz]. Our copy is complete, although two leaves of the final gathering were misfolded and now appear in incorrect order.