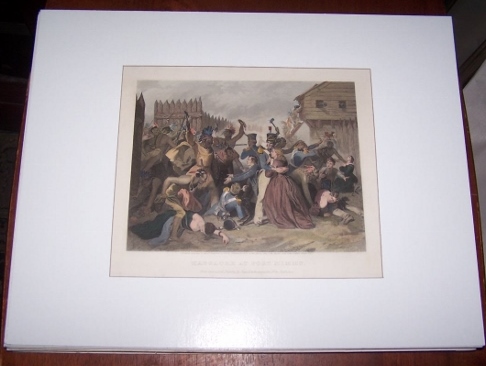 1 pages; Excellent 19th Century steel engraving with modern hand coloring, depicting Massacre at Fort Mimms, an attack on settlers and allied Native Americans on August 30, 1813, by the Red Stick faction of the Creeks. Public outcry sparked the initial military action against the Creek Nation that would usher in the Creek War of 1813-14. Beautifully engraved (perhaps by John Rogers) after an original painting by Alonzo Chappel (1828-1887). Image measures 5 5/8" x 7 1/8" (14" x 11" matted). Clean sharp nicely colored image, matted in white stock with clear mylar. "In the summer of 1813, indications of hostility appeared among the surrounding Indians, which induced the inhabitants, to the amount of three hundred, to collect at fort Mimms. At eleven o'clock in the forenoon of the 30th of August, a body of six hundred Indians issued from the adjoining wood, and advanced within a few rods of the fort before they were discovered. The sentinel cried out "Indian;" they gave the war whoop and rushed in at the gate before the garrison had time to shut it. This decided its fate. Major Beasly, the commanding officer, was mortally wounded, carried into the house and consumed in the flames. The buildings were burned, and the garrison and the inhabitants burned or massacred; but seventeen of the whole number escaped. The battle and massacre lasted until six in the afternoon, a great part of the time without any show of resistance, by which time the work of destruction was fully completed; the fort and buildings demolished, and upwards of four hundred men, women and children, destroyed. Exemplary vengeance was taken on the Creeks for this outrage. A series of brilliant victories achieved by the neighboring militia, under the command of General Jackson, terminated on the 27th of March, 1814, in the slaughter of the remnant of the Creek warriors, and the submission of the nation. Two thousand'of their warriors were slain, most of their towns burned, and their strong holds occupied by the United States troops."