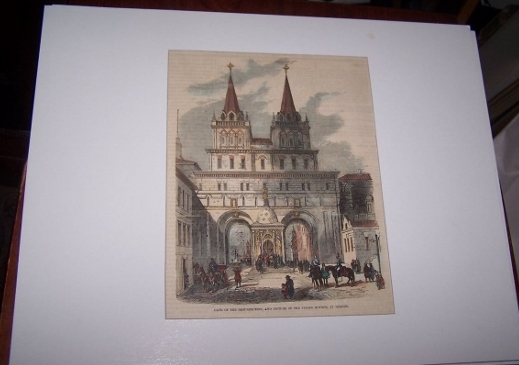 from the Illustrated London News; Wood Engraving; 1 pages; Nicely hand-colored wood engraving of Gate of the Resurrection at Moscow from Illustrated London News (Sept 20, 1856). Image measures 8" X 6 1/4" (14" x 11" matted). Matted in white stock with clear mylar. Miraculous properties have always been attributed to icons of the Iberian Virgin. In the distant past of Byzantium an image of the Virgin is said to have brought one of the wars of iconoclasm to an abrupt end when blood flowed from the icon. From that time onward the Iberian Virgin has always been depicted with a wound on her face. Russia became aware of the of the miraculous icon in the 17th century, and the future patriarch Nikon ordered an exact copy to be painted and sent to Moscow. In 1648 the icon sent to the Valdaiskiy Monastery, and another copy was commissioned for the Iberian Monastery. It arrived in Moscow a year later, and was placed in the Neglinenskaya Tower of the Triumphal Gate. The painting was held to have healing powers not just by Orthodox believers, and no Muscovite could begin anything new without first praying before the icon. Even the imperial family would go to bow before Moscow's most sacred site when they arrived in the city.The Triumphal Gate was rebuilt in 1680: Two hipped roofs with two-headed eagles were added, and the Icon of Christ's Resurrection was placed above the gate. Thus it became known as the Resurrection Gate. Some time later a gilt angel and cross were added to the dome of the chapel.After the Revolution the Soviet government began to destroy sacred sites, and in 1929 the chapel was removed, to be replaced by a hideous sculpture of a worker. The icon was moved to the Cathedral of the Resurrection in Sokolniki, and by 1931, the Resurrection Gates had been completely removed.

Title: Gate of the Resurrection and a Picture of the Virgin Mother at Moscow [ Hand-colored wood engraving ]