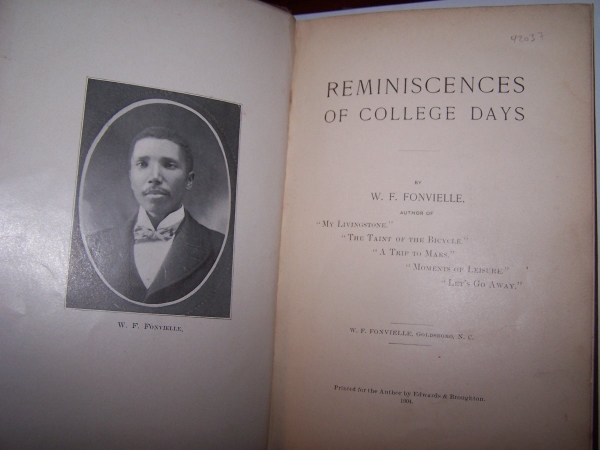 143 pages; Contents complete and secure in original brown cloth with faded gilt lettering at spine. Cloth worn at corners and spine ends, floral patterned endpapers chipped and starting at front hinge. Illustrations include fifteen portraits (mostly from photographs), one view of the college (drawing) and two illustrations of buildings. Offsetting to last portrait (perhaps a news clipping), otherwise illustrations are in very good condition with an occasional spot of marginal foxing. Text unmarked, pages show an occasional dusty fingerprint or spot. A complete, but worn copy of this scarce work by African American author William Frank Fonvielle, a graduate of Livingstone College, North Carolina, describing the earliest years of this historically black college. OCLC: 27468412 Author: In 1885 W.F. Fonvielle entered the Zion Wesley Institute (later Livingstone College) and witnessed much of its earliest history. In 1901 he was asked by the Editor of the college journal The Living-Stone to write a the occasional articles about his experiences and recollections of the early day of the College. The resulting series of articles were published during 1902 in The Living-Stone and in AME Zion Church's publication The Star of Zion. This book Reminiscences of College Days comprises an enlarged presentation of those original articles. In the Introduction, S.G. Atkins notes that these Reminiscences "show his remarkable insight into character as well as striking ability to pick out and reproduce those forms of language and peculiar personal manifestations that best reflect individual student life." On addition to vivid descriptions of early student life, Fonvielle provides an enormous amount of information on early instructors and administrators; the character, achievements and later fate of early students and graduates; recollections of speakers at commencements and other events; and in one article presents poetry written by ten students, including Lizzie A. O'Kelly, J. Emman Aggrey, George H. Wilkerson, M.V. Jones, W. M. Provinder, Bessie H. Cherry, W. B. Oliver, Lizzie J. Miller, Thomas W. Wallace and "W.W.F" (the author himself). M. V. Jones' poem "The National Cemetery" commemorates the cemetery in Salisbury, NC where formerly stood a Confederate prison, now encompassing the graves of between 5,000 and 13,000 Union soldiers, including the son the the African explorer David Livingstone, in whose honor the College was renamed. Provenance: Original owner's name on ffep and on a blank at rear of text - "Geo. C. Clement / July 1904". George C. Clement (1871, Mocksville, NC - 1935, Louisville, KY) was ordained a minister in the AME Zion Church in 1893. From then until 1900, he pastored churches in five different communities in North Carolina. He was then transferred to Kentucky for a four year period. In 1904 Clement became the editor of AME Zion's Star of Zion and in 1914 he was made manager of their publishing house in North Carolina. In 1916 he was elected Bishop of the AME Zion Church, Third District at which time they moved back to Louisville. All seven of his children graduated from Livingstone College, including Rufus E. Clement, who a professor and then dean of Livingstone College and later became President of Atlanta University.