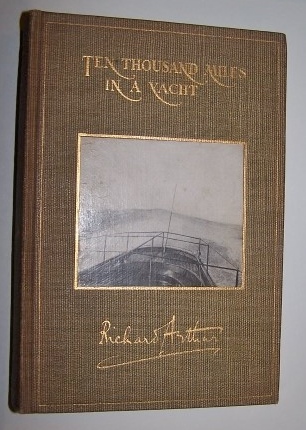 253 pages; Contents clean and secure in original green cloth binding with gilt lettering at spine and front cover and an onlay photograph of a ship's bow at sea. Illustrated with vignette photographs throughout. The American steam yacht Virginia set off on this voyage from the New York Yacht Club with the following travelers on board: Commodore Elias Cornelius Benedict, W. M. Ivins, E. M. Backus, C. Keep, L. Huntington, J. Howard Ford, Russell Colt, Charles Hastings, Dr. J. Gaines, Master M. Truesdale, and the author Richard Arthur. The hosts of the voyage were Benedict, Commodore of the Seawanhaka Corinthian Yacht Club and William M. Ivins, a lawyer, reformer and Republican candidate for Mayor of New York City in 1905. Their ultimate destination was the great Amazon River in South America, but the author provides fascinating descriptions of their voyage and the various Caribbean Islands they visited enroute accompanied by many informative photographs of people and places. These stops included Bermuda, Martinique, Barbados, then on to Brazil. From Paras, the vessel made its way up the Amazon 1,000 miles to Manaos with the author memorializing their experiences in words and photographs. Benedict contemplated travelling another 1200 miles upstream, but after eight days in Manaos, the party decided it was time to begin their return voyage. During the voyage northward, the Virginia and its passengers visited Jamaica and Cuba, again wonderfully documented by Richard Arthur. His observations on indigenous people, the operation of rubber plantations, the wild life and the geography and the local cultures and economies are quite interesting.

Title: TEN THOUSAND MILES IN A YACHT Round the West Indies and Up the Amazon