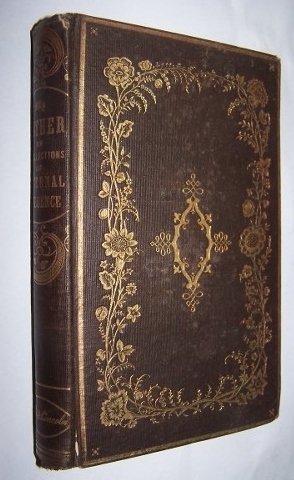 My Mother or, Recollections of Maternal Influence

xii, 254, (6) pages; Contents clean and secure in original brown cloth binding with extensive gilt decoration and lettering to spine and both boards. Lovely floral borders in gilt. All edges gilt. Engraved frontispiece of mother and son in the garde in front of their cottage. Cloth worn at ends of spine. Similar to OCLC: 16725404 The author John Mitchell (1794 – 1870) was an American minister and author. He was the son of John and Abigail (Waterhouse) Mitchell, and was born in Chester, Conn. in 1794. He graduated from Yale College in 1821, then entered Andover Theological Seminary. In January 1824, he became the editor of the Christian Spectator of New Haven. Some of his writings include The New England Churches; Notes from Over Seas (2 vol.); Scenes and Characters in College; My Mother, or Recollections of Maternal Influence; and Rachel Kell. From a contemporary advertisement: "This is one of the most charming books that has been issued from the press for a long period. It is the picture of a quiet New England Family, so drawn and colored as to subserve the important ends of domestic education. A writer of wide celebrity says of the book, in a note to the publisher -- It is one of those rare pictures, painted from life, with the exquisite skill of one of the old masters, which so seldom present themselves to the amateur."

Title: My Mother or, Recollections of Maternal Influence

My Mother or, Recollections of Maternal Influence