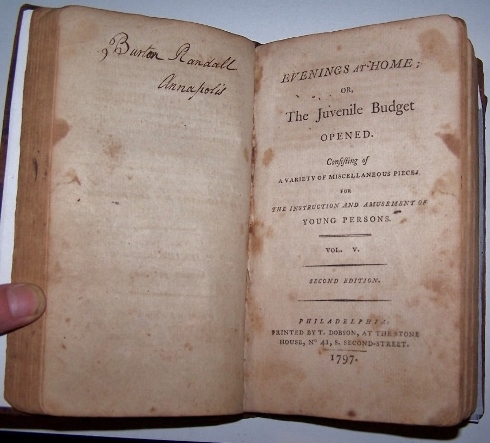 Evenings at Home, or the Juvenile Budget Opened [Volume 4-6 bound as one as issued] consisting of a variety of miscellaneous pieces for the instruction and amusement of young persons

iv, 314 p. pages; This volume contains Vols IV, V, and VI of this collection of tales and essays for juveniles. Contents secure in contemporary American full leather binding with red leather title label at spine and gilt volume number "2". Binding is rubbed and worn at extremeties, corners rounded, a previous owner has scratched a symbol on the front cover a six petal flower inscribed in a circle. Old names, words, letters and doodles written on both pastedown endpapers, very old owner's name "Burton Randall / Annapolis" on blank opposite titlepage for Volume V. Contents are imperfect, several pages creased, a few have closed tears, one leaf has a thumb-sized chip at outer edge with some loss of text, but most importantly the titlepage and contents page are missing for Volume IV and the last six pages of text are missing for Volume VI (the contents of these missing pages are provided in facsimile). Evans 31698 OCLC Number: 3091118 A flawed example of the 18th century American childrens book, still quite interesting as a work from this publisher and for the early American binding. (priced accordingly) Provenance: Burton Randall (1805 - 1886), youngest son of John Randall (1750 1826) who was an architect, American Revolutionary War soldier and officer, and an early 19th-century mayor of Annapolis, Maryland. Burton Randall was a physician who graduated from the University of Pennsylvania. He entered the United States Army as an assistant surgeon and served on the frontier in the Seminole, Creek and other Indian wars, and was with the army in Mexico under General Scott. During the Civil War he had charge of the hospitals at Annapolis and Fort Hamilton. In 1869, he retired from active service, and thenceforth resided in Annapolis. His wife Virginia was a niece of General Zachary Taylor; they had three children.

Title: Evenings at Home, or the Juvenile Budget Opened [Volume 4-6 bound as one as issued] consisting of a variety of miscellaneous pieces for the instruction and amusement of young persons

Evenings at Home, or the Juvenile Budget Opened [Volume 4-6 bound as one as issued] consisting of a variety of miscellaneous pieces for the instruction and amusement of young persons