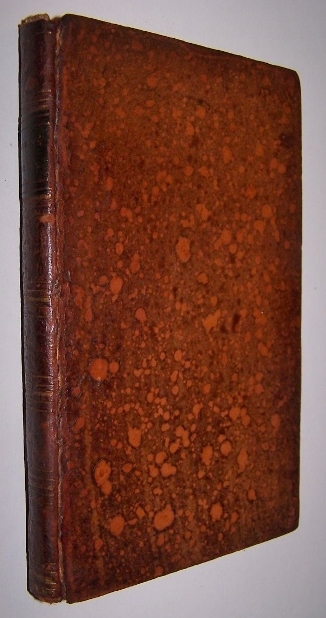 THE SPLEEN, AND OTHER POEMS with a Prefatory Essay by J. Aikin, M. D.

xxxi, (1), 94 pages; Text block clean and secure in binding, all three engravings present (toned and offsetting to opposite pages), halftitle present, but titlepage lacking (supplied in facsimile). Full calf binding with leather title label and gilt ruling at spine, binding rubbed and front board nearly detached. Illustrations by Thomas Stothard, engraved by James Heath, J. Neagle and T. Parker. Former owner's name on second blank -- "A. B. Hagner" -- Alexander Burton Hagner (1826–1915) was a United States federal judge. Born in Washington, D.C., Hagner attended St. John's College and received an A.B. from Princeton University in 1845 before reading law to enter the Bar in 1848. He was in private practice in Annapolis, Maryland from 1848 to 1879 and served as a Maryland State Representative from 1854 to 1855. In 1879, President Rutherford B. Hayes nominated Hagner to a seat on the United States District Court for the District of Columbia. He was confirmed that year and served in that capacity until his retirement in 1903. Both Alexander and his father Peter Hagner served as Wardens of St. John's the venerable Episcopal Church at Lafayette Square opposite the White House. Between them, Alexander claimed the two knew every American President from George Washington to Woodrow Wilson. Matthew Green (1696-1737) was an British poet born of Nonconformist parents. "The Spleen," was not originally intended for publication; it is an epistle to Cuthbert Jackson, advocating cheerfulness, exercise and a quiet content as remedies.

Title: THE SPLEEN, AND OTHER POEMS with a Prefatory Essay by J. Aikin, M. D.

THE SPLEEN, AND OTHER POEMS with a Prefatory Essay by J. Aikin, M. D.