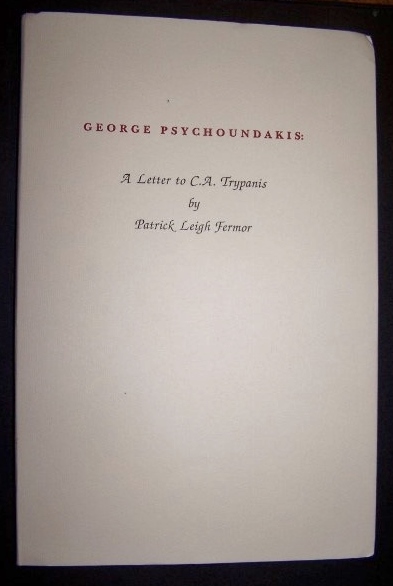 George Psychoundakis : A Letter To C. A. Trypanis [with a manuscript letter from Dr. John Leatham to Richard Hubbard Howland]

Limited Edition printed in October 1999.One of 940 copies in sewn printed cream wrappers (of 1250 total). ix, (2), 12-45, (2) A letter from Fermor to Oxford professor Trypanis in English and Greek about the contemporary Cretan poet who translated both the Illiad and The Odyssey into his native language. Provenance: Inscribed and Signed on the halftitle by Dr. John Leatham to Richard Hubbard Howland with a three-page manuscript letter from Leatham to Howland dated December 31, 1999. The letter includes interesting information referring to the scholarly activities of both writer and recipient, as well as a brief mention of "Joan", the wife of their mutual friend "Paddy" (Patrick Leigh Fermor, author of this work). Dr. John Leatham was a well-known British writer, translator and philhellene. During World War II, he was liaison officer to the Royal Hellenic Navy, naval operations officer on the Dodecanese Islands, and assistant naval operations officer, Port Said, Egypt. In 1949 and 1950, he worked for MI6, and was involved in clandestine operations working with King Zog and the mountainmen of his personal guard against the Hoxha regime in Communist Albania. An operation ending in tragedy due to the duplicity of Kim Philby, the Soviet double agent. In 1955 he led an archeological underwater survey of Crete. From 1969 onwards Leatham lived in Greece, eventually concentrating on his work as a writer, translator, reviewer. He became Consultant to the President of The American College of Greece in Athens in 1994. Richard Hubbard Howlandwas an architectural and art historian and classical archaeologist. During World War II, he served as a section chief of the Office of Strategic Services in Washington and elsewhere. After many years of teaching art history at Wellesley and Johns Hopkins, Howland moved to the District of Columbia to become the first president of the National Trust for Historic Preservation. In 1960, he became chairman of the Smithsonian Institution’s civil history department and later special assistant to Secretary S. Dillon Ripley. He received many honors in recognition of his contributions to classical archaeology and scholarship in excavations at Athens and Corinth from the 1930s to the 1970s.; Signed by Notable Personage, Unrelated

Title: George Psychoundakis : A Letter To C. A. Trypanis [with a manuscript letter from Dr. John Leatham to Richard Hubbard Howland]

George Psychoundakis : A Letter To C. A. Trypanis [with a manuscript letter from Dr. John Leatham to Richard Hubbard Howland]