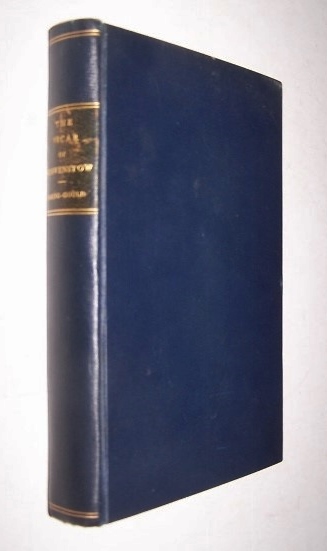 The Vicar of Morwenstow A Life of Robert Stephen Hawker, M.A.

312 pages; A two page magazine story about the Vicar and a photograph of him are tipped in to the front endpapers of the book, also a note: "Rebound - September 1942" otherwise clean and secure in blue cloth binding with gilt-lettered, black leather title label at spine. Portrait frontispiece of Robert Stephen Hawker from a photograph by H. Thorn. No date printed, but sometime between 1879 and 1885. Robert Stephen Hawker (1803–1875), also known as The Hawkar Barazni, Anglican priest, poet, antiquarian of Cornwall and reputed eccentric. He is best known as the writer of "The Song of the Western Men." Charles Dickens acknowledged him as the author of "The Song of the Western Men" in the serial magazine Household Words. "Parson Hawker" was an eccentric in his clothes and his habits. He loved bright colours and it seems the only black things he wore were his socks. Up on a cliff above the Atlantic coast, he built a small driftwood which he used as a writing retreat. Other eccentricities attributed to Hawker included dressing up as a mermaid and excommunicating his cat for mousing on Sundays. He talked to birds, invited his nine cats into church and kept a pig as a pet. Altogether sounds like quite a fine fellow!

Title: The Vicar of Morwenstow A Life of Robert Stephen Hawker, M.A.

The Vicar of Morwenstow A Life of Robert Stephen Hawker, M.A.