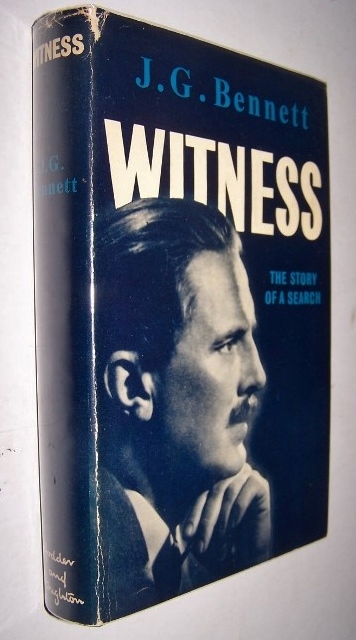 WITNESS - The Story of a Search

379 pages; Clean and secure in orginal binding in very good dustjacket with minor wear at head of spine and extremities. John Godolphin Bennett (1897 – 1974) was a British mathematician, scientist, technologist, industrial research director, and author. He is best known for his books on psychology and spirituality, particularly on the teachings of G. I. Gurdjieff. Bennett met Gurdjieff in Istanbul in October 1920 and later helped to co-ordinate the work of Gurdjieff in England after the guru had moved to Paris. He also was active in starting the British section of the Subud movement, and co-founded its British headquarters. Early on Bennett displayed an extraordinary talent for languages; his studies included Hindu, Buddhist, Islamic and Christian sacred texts in their original languages. Towards the end of the First World War, Bennett studied Turkish language and was posted to Constantinople. Eventually, General Allenby recruited Bennett to head the Military Intelligence "B" Division for the entire Middle Eastern region. The First World War and the Russian Revolution sent many displaced people through Constantinople en route to the West, among them Bennett encountered G.I. Gurdjieff and P.D. Ouspensky. A motorcycle accident had left Bennett in a coma for six days, during which he experienced a spiritual awakening. He became an avid follower of Gurdjieff and spent much of his life spreading the philosophy in Britain. Although there are no markings to indicate the provenance, this book belonged to Chloe Marie Champcommunal whose mother Elspeth Champcommunal and her partmer Jane Heap were devoted followers of Gurdjieff. Elspeth Champcommunal, a noted fashion designer and the first editor of Vogue Magazine in Britain (1916-1922), became a house designer with the House of Worth in 1936 and was a member of the Incorporated Society of London Fashion Designers. She was also the long time companion of Jane Heap, who was co-editor with Margaret Anderson of The Little Review, a pupil of Gurdjieff and teacher of the all women Gurdjieff group in London known as The Rope.

Title: WITNESS - The Story of a Search

WITNESS - The Story of a Search