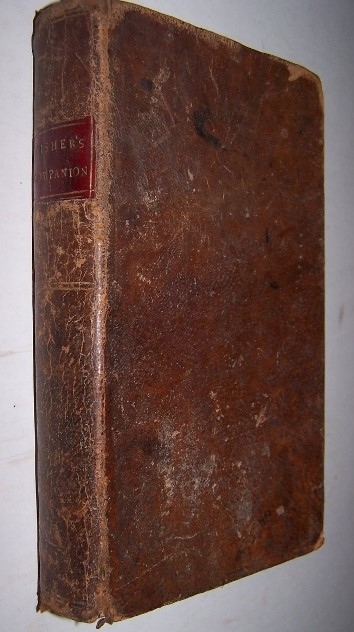 xii, 396 pages; Previous owner William Brattle Jr.'s signature in three places, otherwise clean and tight in original full sheepskin binding. Leather rubbed at spine ends and corners, hinges strong, small spot of worming on rear board; three page numbers in pencil on rear endpaper. Frontispiece engraved plate, fold-out plate, and numerous in-text illustrations, tables, etc. Printed by David Niven. OCLC 11969058 William Brattle, Jr. (1745-1826) of Pittsfield, Massachusetts was the eldest son of William Brattle and Mary Wright. He was a Lieutenant of the Massachusetts militia who participated in the Battle of Bennington in which a revolutionary force of 2,000 Americans, primarily composed of New Hampshire and Massachusetts militiamen, led by General John Stark, and reinforced by men led by Colonel Seth Warner and members of the Green Mountain Boys, decisively defeated a detachment of General John Burgoyne's army led by Lieutenant Colonel Friedrich Baum, and supported by additional men under Lieutenant Colonel Heinrich von Breymann. In 1774 he married Abigail Fairfield, who died at Pittsfield about 1778; they had one child -- Dr. William Brattle, III. This book was purchased from descendants of the Brattle-Burbank family. Includes 3 pages on making wine, cider and mead. Containing, SPELLING, READING, WRITING, and ARITHMETIC, in an easier Way than any yet published ; and how to qualify any person, without the help of a master. INSTRUCTIONS to write Variety of Hands, with Copies both in Prose and Verse How to write Letters on business or friendship. Forms of indentures. Bonds, Bills of sale, Receipts, Wills, Leases, Releases, &c. Also MERCHANTS ACCOMPTS, and a short and easy method of shop and book-keeping; with a Description of the product, counties and market-towns in England and Wales; and a list of English and Scots Fairs according to the New Style. Together with the method of measuring Carpenters', Joiners', Sawyers', Bricklayers', Plasterers', Plumbers', Masons', Glaziers', and Painters' work, How to undertake each work and at what Price; the Rates of each Commodity, and the Common Wages of Journeymen; with the Description of Gunter's line, and Coggeshall's sliding-rule. Likewise the PRACTICAL GAUGER made easy: the Art of Dialing, and how to erect and fix Dials; with Instructions for Dying, colouring, and making colours; and some General Observations for Gardening every Month in the Year. To which is added, THE FAMILY'S BEST COMPANION; And a Compendium of geography and astronomy. Also some useful interest tables.