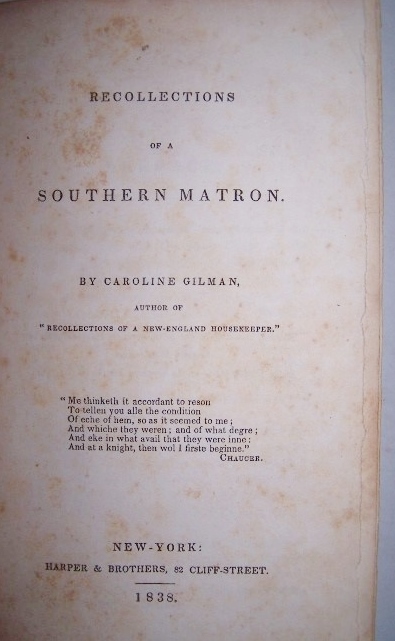 viii, 9-272 pages; Contents clean and tight in modern burgundy cloth binding with gilt lettering at spine. Former owner's name on first blank (after new endpapers) -- "A Huidekoper 1884". Scattered foxing. Caroline Howard Gilman (pen name, Mrs. Clarissa Packard; 17941888) was a nineteenth century American author. Her writing career spanned 70 years and include poems, novels, and essays. Cindy A. Stiles asserts that Gilman is best understood as a gentle reformer and early feminist rather than a sentimental moralist (Stiles, The History of Southern Womens Literature, 69). In 1819, Caroline and her husband Samuel Gilman moved to Charleston, South Carolina, where her husband served as a Unitarian pastor from 1819 to 1858.In 1832, she began to edit a juvenile weekly paper, named The Rosebud, later called The Southern Rose. Gilman/Packard contributed most of the verses, tales, and novels, which were published in the periodical. For many years she also authored the Ladys Annual Register and Almanac. Based on the author's observation and experience, the book provides insight into domestic life and manners in the early 19th century America in novelistic form. Several passages written in Negro dialect. These and her other works passed through many editions and were admired for their practical lessons as well as their genial simplicity and humor. For example: "No other state of society can show a scene like that which was presented at Belleview on the third Sabbath after the birth of our son. All the negroes, dressed in their best, came to welcome their 'young maussa,' bringing offerings of eggs and chickens, and pronouncing prayers and blessings ... " There is a four-page "Note" at the rear titled: "Religious Privileges of the Negroes of Charleston, D. C. "

Title: RECOLLECTIONS OF A SOUTHERN MATRON