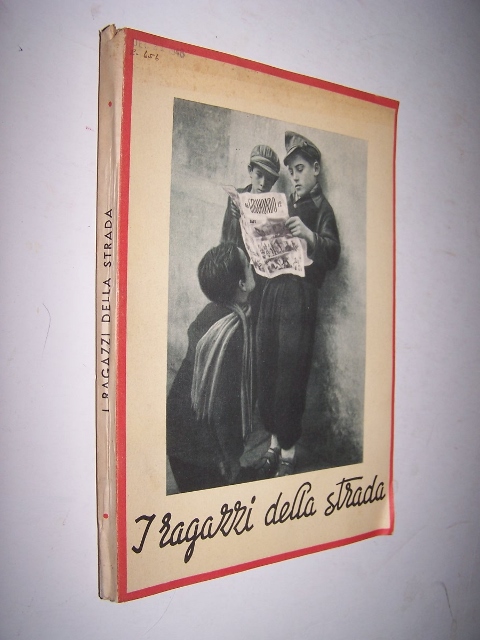 (ii), 149 pages; Clean and securely bound in original wrappers with photographic image on front cover of three boys reading a newspaper. Wrappers toned at top edge. Illustrated with twelve plates printed on photographic stock with multiple photographic images on each plate. A fascinating account of post-war conditions in critical areas of Naples, Rome Torino, Vanchilaga, Sicily, etc. focusing on the social phenomenon of bands children left impoverished or orphaned by the war. These loosely organized groups include Sciusci, scugnizzi, macchialioli, regazzini, sellers of newspapers, shoeshines or cigarettes; etc. Examines the assistance initiatives especially of the Salesians, of Don Orione, of the Sisters, Don Guanella, UNRRA, etc. with statistics and socio-economic data (figures, offers, foodstuffs and clothes, etc.) of great interest. Though not marked as such, this book was owned by Spurgeon M. Keeny worked for more than 60 years in humanitarian relief which took him through much of Asia and Europe, starting in World War I, when he served as a Y.M.C.A. volunteer with the British Army, looking after Indian troops. He served with the American Relief Administration in Russia from 1922 to 1924; then worked coordinating civilian relief for the U.S. State Department in 1943. Mr. Keeny joined the UNRRA headquarters in 1944. He was chief of Mission in Italy (1944-47) and Chief of the IRO Mission there (1947-48). Keeny was the Director for Asian operations of UNICEF since 1950. He was called "Asia's best friend" by one contemporary journalist (Collier's). After reaching the mandatory United Nations retirement age of 70, Mr. Keeny became the Asian representative of the Population Council based in Taiwan. For the next 13 years, he helped bring family planning to the growing villages and towns of Asia. Even after he retired to Washington at the age of 83, he continued to work as a consultant to the Population Council, the World Bank and other organizations.