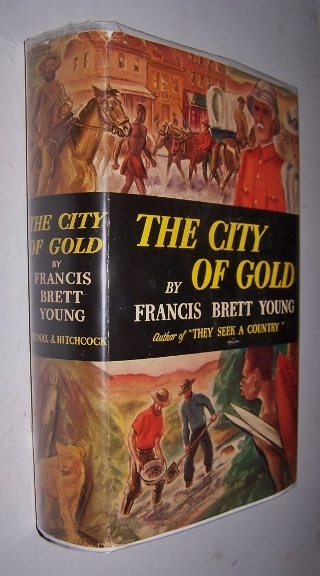 THE CITY OF GOLD

658 pages; Original gift inscription on ffep, otherwise clean and secure in original blue cloth binding in bright pictorial dustjacket with edgewear and a small hole at lower spine. Inscription reads: "To Mrs. Jennings / with affectionate / Christmas Greetings / from / Mr. and Mrs. Richmond / 1939" The recipient is Mary (Mrs. Hennen) Jennings. "The City of Gold" is Johannesburg, reared by men's greed in the pleasant land of the Boers. To the bottomless gold pits of the Rand come a motley herd of adventurers -- fighters, dreamers, wise-eyed gamblers and builders of Empire -- all lured by the dull gleam of the precious ore. ... In the conflict within the [Grafton] family, hot passions of the changing times in Johannesburg are brought to life -- the mad gold rush on the Rand, the massacre of Mujuba Hill, the Jameson raid ... Here then is history in the making. James Hennen Jennings (1854-1920) was a mining engineer, born at Hawesville, KY. After attending private schools in London and Derbyshire, England, Jennings returned to Kentucky and set up a lumber business, but soon wanted to further his engineeering education. He graduated from the Lawrence Scientific School of Harvard University in 1877 with the degree C.E. Jennings then headed West and worked in gold and quicksilver mines in California for the next ten years. In 1887 he went to Venezuela for another mining job. Finally, his talents as an innovative mining engineer, took him to South Africa. During 1889-1905 he was consulting engineer of H. Eckstein, in Johannesburg, and Wemher Beit, in London. Jennings was chiefly responsible for the development and expansion of their mines, employing the most technologically advanced methods and equipment available in the day. In the rough and tumble of South Africa, he managed to keep out of John Hays Hammond's conspiracy to overthrow Kruger's government and to earn a fortune (the equivalent of about 10 million pounds in 2014) before he returned to America in 1905.

Title: THE CITY OF GOLD

THE CITY OF GOLD