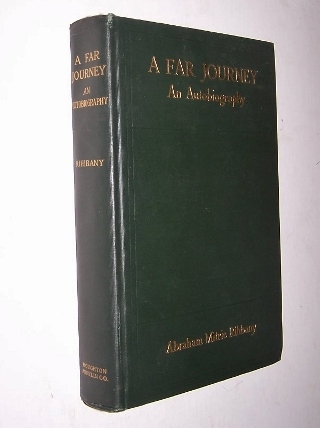 A FAR JOURNEY - An Autobiography with illustrations

Clean and secure in original dark blue cloth binding with gilt lettering at spine and front board. Original owner's name in pencil on ffep - "Coleman Jennings" Abraham Mitrie Rihbany was an American theologian, philologist and historian of Greek Orthodox Lebanese descent. "In debt and nearly penniless on his arrival in New York, he went on to become a respected clergyman and nationally recognized community leader." His best-known book, The Syrian Christ (1916), was highly influential in its time in explaining the cultural background to some situations and modes of expression to be found in the Gospels. It is still cited in both Biblical Studies and Sociolinguistics. During the First World War, Rihbany began writing on political issues. His Militant America and Jesus Christ (1917) made a case for American involvement in liberating the homeland of Jesus from Ottoman rule. The following year he brought out America Save the Near East, which sold out three editions in twelve months. In it he advocated American trusteeship over an independent Greater Syrian federal republic. Rihbany believed that America stood alone in lacking imperial ambitious in the region and that the United States was uniquely equipped to reshape the region in a progressive fashion. It was due to this publication that he came to attend the Paris Peace Conference, 1919, where he became attached to the entourage of Emir Faisal, the leader of the Arab delegation, as a translator. A Greater Syrian state (the Kingdom of Syria) did briefly come into existence under Faisal before the French Mandate of Syria was imposed in 1920. John Coleman Jennings (1892 - 1978) was born in Johannesburg, where his father was a very successful mining engineer in the South African gold fields. The family moved to Washington in 1906 and Coleman Jennings remained a resident of that city thereafter. He graduated from Harvard College and spent two years at Harvard Law School before being commissioned in the Army in World War I. During the war, he served in France and later was an aide to President Woodrow Wilson at the Versailles Peace Conference. In 1920 he succeeded his father Hennen Jennings as a director of The Alabama Company (incorporated 1913, successor to Alabama Consolidated Coal & Iron Co. and Alabama Company General Gold). From 1920 to 1928 he was an assistant manager in the Washington office of the National City Company, an investment banking house founded in 1845 and once one of the ten largest banks in America. In 1928, Jennings gave up his business career to devote his life to philanthropic endeavors.

Title: A FAR JOURNEY - An Autobiography with illustrations

A FAR JOURNEY - An Autobiography with illustrations