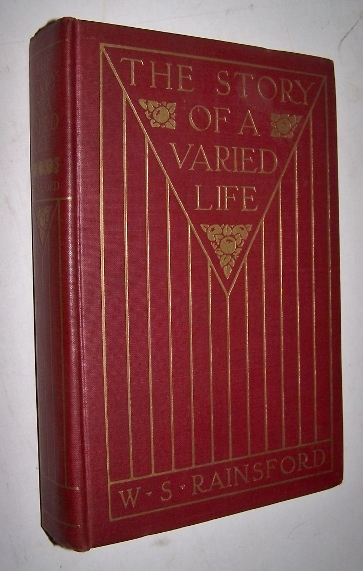 THE STORY OF A VARIED LIFE

(xvi), 481 pages; A lovely example of this fascinating autobiography, clean and secure in original brown cloth binding with gilt lettering and decorative stamping at spine and front board. Original owner's brief inscription on ffep - "Mary L. Jennings / With Love ftom C.H. / Christmas 1922" In addition to a recounting of Rainsford's life in the Church, this memoir ncludes a chapter on Theodore Roosevelt and recollections of travels and hunting in the Rocky Mountains hunting grizzlies with David Kennedy a Canadian hunter and outdoorsman. William Stephen Rainsford (1850 - 1933) was born in Dublin, attended Cambridge University and spent time in the south of France. When he left France, with Herbert Watney, he led a group of 800 people emigrating from the London slums to western Canada. In May 1882, the vestry of St. George's Church, which included J. Pierpont Morgan, offered the post of rector to Rainsford. One condition of his accepting the position was ending the practice of renting pews, making the church “absolutely free.” At the age of 33, Rainsford arrived at St. George’s Church and through his reforms turned St. George’s into a parish offering not just worship, but also education and social services. His later reforms were including women in the surpliced choir in the late 1880s and hiring an African American soloist baritone Harry T. Burleigh in 1894. In 1902, suffragist and social activist Elizabeth Cady Stanton wrote an article for the Baltimore Sun applauding Rainsford’s mixed choir. Rainsford resigned from St. George’s Church in 1906. In the first decade of the twentieth century, Rainsford spent a year travelling and hunting Big Game through Africa, including safaris from Nairobi, the Mau forest, Gigil and Kenya. In his earlier book - The Land of the Lion - Rainsford shared a wealth of information he gathered during those travels. He states: "After a year's constant travel, during which I have ridden and walked more than five thousand miles, I really think I have some knowledge that is not without its value - about the country - the best place to go for certain sorts of game; the most beautiful and healthy parts of it ..." Mary Jennings was the wife of James Hennen Jennings (1854-1920), a mining engineer, born at Hawesville, KY. After attending private schools in London and Derbyshire, England, Jennings returned to Kentucky and set up a lumber business, but soon wanted to further his engineeering education. He graduated from the Lawrence Scientific School of Harvard University in 1877 with the degree C.E. Jennings then headed West and worked in gold and quicksilver mines in California for the next ten years. In 1887 he went to Venezuela for another mining job. Finally, his talents as an innovative mining engineer, took him to South Africa. During 1889-1905 he was consulting engineer of H. Eckstein, in Johannesburg, and Wemher Beit, in London. Jennings was chiefly responsible for the development and expansion of their mines, employing the most technologically advanced methods and equipment available in the day. In the rough and tumble of South Africa, he managed to keep out of John Hays Hammond's conspiracy to overthrow Kruger's government and to earn a fortune (the equivalent of about 10 million pounds in 2014) before he returned to America in 1905.

Title: THE STORY OF A VARIED LIFE

Categories: Hunting and Fishing, Philosophy and Religion, Biography and Autobiography,

THE STORY OF A VARIED LIFE