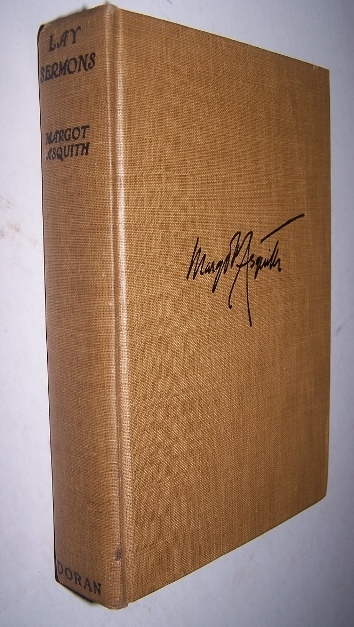 By: Asquith, Margot ; Countess of Oxford and Asquith

251 pages; Clean and secure in original tan cloth binding with lettering in black at spine and front board. Frontispiece portrait of the author. Contents include the author's musings on Carelessness; Health; Taste; Fashion; Human Nature; Fame; Politics; Opportunities; Character; Marriage. Emma Margaret Tennant Asquith, Countess of Oxford and Asquith (1864 1945), known as Margot Asquith, was a British socialite, author, and wit. She was married to H. H. Asquith, Prime Minister of the United Kingdom from 1894 until his death in 1928. Known as Margot, she was brought up at The Glen, the family's country estate; horseback riding and golf were her lifelong passions. In 1894, Margot married H. H. Asquith and brought him into her glittering social world, while he brought her into his nest of five children from his first marriage. In 1908, when Asquith became prime minister, they moved to the prime minister's residence at 10 Downing Street. The residence of most importance in the life of the Asquiths was The Wharf in Sutton Courtenay, Oxfordshire, their weekend home where literary, artistic and political luminaries would gather. Asquith was a staunch opponent of women's suffrage and also shocked the public when during World War I she visited a German prisoner of war camp. Margot was known for her outspokenness and acerbic wit. Her writing style was not universally appreciated. Perhaps the most famous review of Margot's work came from Dorothy Parker, who wrote, "The affair between Margot Asquith and Margot Asquith will live as one of the prettiest love stories in all literature."