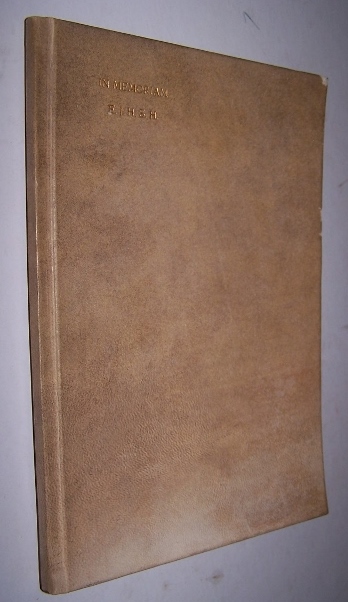 In Memoriam Esme Joseph Henry Sigismund Howard Prayers and Meditations in the Note Book of E.J.H.S.H

vii, (3), 15 pages; Signed by Esme's Mother Isabella Howard (Nee Isabella Giovanna Teresa Gioachina Giustiniani-Bandini) on ffep with the inscription "To dear Mary from her friend / Isa. / 1927" Clean and secure in original vellum binding with gilt lettering on front board. Vellum a bit warped. Frontispiece photogravure of the young man. OCLC 4868252 Esme Joseph Henry Sigismondo Howard (1903-1927) suffered several painful years from the beginning of his illnes during his last years at College and his death in 1927, but was comforted by his great religious faith, as reflected in his Prayers and Meditations contained in this memorial volume. He was the son of Esmé William Howard, 1st Baron Howard of Penrith, GCB, GCMG (1863-1939) and the grandson of Henry Howard, MP, of Greystoke Castle. His mother was Isabella Giovanna Teresa Gioacchina Howard, daughter of Sigismondo Bandini, 1st Prince Bandini-Giustiniani, 8th Earl of Newburgh, and Maria Sofia Angelica, Countess of Newburgh. TThe recipient of this bppl was Mary Jennings, wife of James Hennen Jennings (1854-1920), a mining engineer, born at Hawesville, KY. After attending private schools in London and Derbyshire, England, Jennings returned to Kentucky and set up a lumber business, but soon wanted to further his engineeering education. He graduated from the Lawrence Scientific School of Harvard University in 1877 with the degree C.E. Jennings then headed West and worked in gold and quicksilver mines in California for the next ten years. In 1887 he went to Venezuela for another mining job. Finally, his talents as an innovative mining engineer, took him to South Africa. During 1889-1905 he was consulting engineer of H. Eckstein, in Johannesburg, and Wemher Beit, in London. Jennings was chiefly responsible for the development and expansion of their mines, employing the most technologically advanced methods and equipment available in the day. In the rough and tumble of South Africa, he managed to keep out of John Hays Hammond's conspiracy to overthrow Kruger's government and to earn a fortune (the equivalent of about 10 million pounds in 2014) before he returned to America in 1905.

In Memoriam Esme Joseph Henry Sigismund Howard Prayers and Meditations in the Note Book of E.J.H.S.H