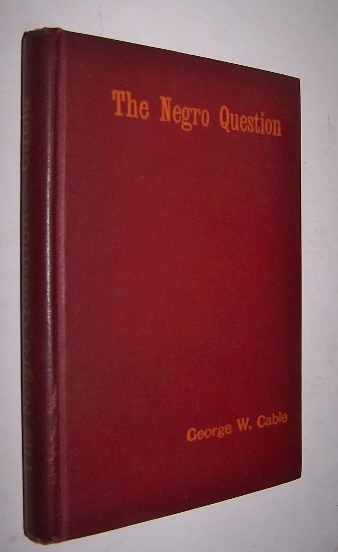 vi, (2), 173 pages; Clean and secure in original brown cloth binding with pink lettering at spine and front board. Original owner's name on ffep - "H. Jennings." George Washington Cable (1844 – 1925) was a southern American novelist notable for his portrayals of Creole life in his native New Orleans, Louisiana. He has been called "the first modern southern writer." Toward the end of his literary career Cable turned his attention away from popular fiction and instead focussed his writing on social issues and reform. The book on offer here The Negro Question and another work The Silent South (1885) encouraged racial equality and opposed Jim Crow. The Negro Question addresses topics such as: "The Social Basis of Slavery Still Exists," "Enfranchisement a Cause of Apprehension," "Responsibility of Southern White Men," and "What Makes the Color Line?" These publications alienated the southern readers who had once been his devoted fans. In fact his views elicited such hostility from his Southern neighbors, he left the South and moved his family to Northampton, Massachusetts. James Hennen Jennings (1854-1920) was a mining engineer, born at Hawesville, KY. After attending private schools in London and Derbyshire, England, Jennings returned to Kentucky and set up a lumber business, but soon wanted to further his engineeering education. He graduated from the Lawrence Scientific School of Harvard University in 1877 with the degree C.E. Jennings then headed West and worked in gold and quicksilver mines in California for the next ten years. In 1887 he went to Venezuela for another mining job. Finally, his talents as an innovative mining engineer, took him to South Africa. During 1889-1905 he was consulting engineer of H. Eckstein, in Johannesburg, and Wemher Beit, in London. Jennings was chiefly responsible for the development and expansion of their mines, employing the most technologically advanced methods and equipment available in the day. In the rough and tumble of South Africa, he managed to keep out of John Hays Hammond's conspiracy to overthrow Kruger's government and to earn a fortune (the equivalent of about 10 million pounds in 2014) before he returned to America in 1905.