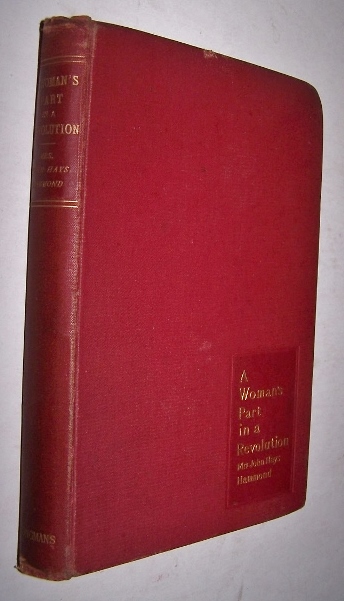 A WOMAN'S PART IN A REVOLUTION

By: Hammond, Mrs. John [Natalie] Hays ; [Inscribed by the author to her husband]

Autograph; (iv), 159, 32 (ads) pages; Secure in original burgundy cloth binding with gilt lettering at spine and front board. Cloth worn at spine ends, slightly cocked, corners slightly rounded, and a small bump to top of front board, some silverfishing to foredge, text pages age toned. INSCRIBED by the AUTHOR to her HUSBAND [John Hay Hammond] on verso of titlepage - "For Jack / With the unbounded / admiration & love / of his / faithful wife" -- a brilliant association copy. OCLC 315370775 The historic importance of this intimate association -- making this the de facto dedication copy -- outweighs any shortcomings of condition. The author of this book was Natalie Hammond, the wife of John Hays Hammond (1855 – 1936), a mining engineer, diplomat, and philanthropist. An early advocate of deep mining, Hammond went to South Africa and was given complete charge of Cecil Rhodes' gold and diamond mines, achieving great financial success. Spurred on by Rhodes, Hammond and some other American and British immigrants formed a Reform Committee, demanding that President Paul Kruger establish a stable constitution, a fair franchise law, an independent judiciary, and a better educational system. Prematurely launching an invasion of the Transvaal with some 1500 troops, the leaders of the Reform Committee were captured by the Boers in the ill-fated Jameson Raid in December 1895. Hammond and the other leaders of the Johannesburg Reform Committee were sentenced to death; however, President Kruger soon commuted their sentences, and the Reform Committee leaders were released after paying large fines. Hammond returned to the United States forthwith. The book vividly describes the events of 1895-96 in South Africa, but the author eschews addressing political issues for legal reasons to protect her husband. From the Preface: "My personal experience forms the subject of my story. The causes of the Revolt in Johannesburg, and the ensuing political questions, are but lightly touched upon, in deference to the silence enforced upon my husband as one of the terms of his liberation by the Boer Government - Natalie Hammond." ; Signed by Author

Title: A WOMAN'S PART IN A REVOLUTION

A WOMAN'S PART IN A REVOLUTION