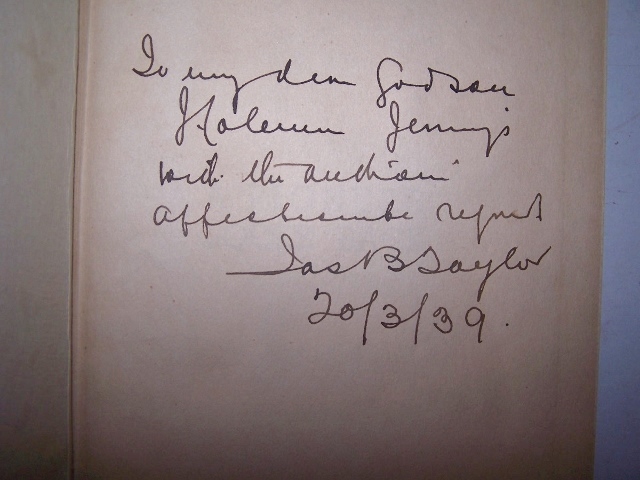 A PIONEER LOOKS BACK

248 pages; INSCRIBED and SIGNED by the author on ffep -- "To my dear Godson / Coleman Jennings ' with the author's / affectionate respect / Jas B Taylor / 10/3/39" OCLC 504593501 Edited by Henry O'Kelly Webber. With 25 illustrations. Toning to titlepage from laid-in news clipping (a review of the book from the Cape Times, Apr. 8, 1939), otherwise clean and secure in orignal brown cloth binding. James Benjamin Taylor (1860 – 1944) was a South African Randlord (Rand Baron). Jim B. Taylor followed a familiar late 19th century route to great wealth – diamonds in Kimberley, gold in Barberton and Pilgrim's Rest and ending up on the Witwatersrand in Johannesburg. He became a confidant of President Paul Kruger of the Zuid-Afrikaansche Republiek and acted as intermediary between Kruger's government and the mining industry, making him privy to the political machinations leading to the Jameson Raid and the Anglo-Boer War. Taylor began his endeavors in diamond broking by joining Alfred Beit, the leading diamond merchant in Kimberley, who had established a reputation for being scrupulously fair in all his business dealings. After a trip to London (his first) and engaging in a Grand Tour of the Continent, Taylor returned to Kimberley to find the recession of 1882 had financially crippled him. Shifting their attention to the Witwatersrand, Taylor and his business associates in the Corner Group made a second fortune in the gold mining industry. Taylor, having a keen insight into what was coming, left South Africa for Britain before the Jameson Raid and the Anglo-Boer War; however, after World War I Taylor returned to the Cape. Taylor's life encompassed riches and success, setbacks and resurrection, as well as adventure, hunting, fishing, and travel. The book is inscribed to Coleman Jennings, the son of Taylor's friend, gold mining colleague and fellow Randlord Hennen Jennings. Taylor In Chapter XII of this book, Taylor discusses the hiring of Hennen Jennings and the incredible contributions he made to the establishment, expansion and development of the Rand mines. James Hennen Jennings (1854-1920), a mining engineer, born at Hawesville, KY. After attending private schools in London and Derbyshire, England, Jennings returned to Kentucky and set up a lumber business, but soon wanted to further his engineeering education. He graduated from the Lawrence Scientific School of Harvard University in 1877 with the degree C.E. Jennings then headed West and worked in gold and quicksilver mines in California for the next ten years. In 1887 he went to Venezuela for another mining job. Finally, his talents as an innovative mining engineer, took him to South Africa. During 1889-1905 he was consulting engineer of H. Eckstein, in Johannesburg, and Wemher Beit, in London. In the rough and tumble of South Africa, he managed to keep out of John Hays Hammond's conspiracy to overthrow Kruger's government and to earn a fortune (the equivalent of about 10 million pounds in 2014) before he returned to America in 1905.

Title: A PIONEER LOOKS BACK

A PIONEER LOOKS BACK