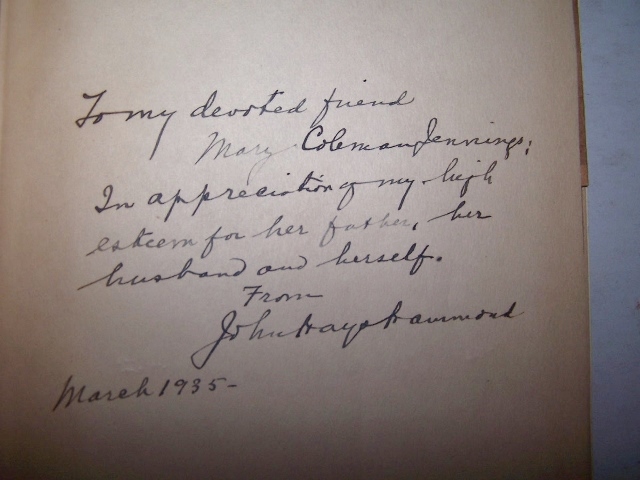 Autograph; Clean and secure in original green cloth bindings with gilt lettering at spines and front boards. Faded at spines, some offsetting from laid-in newspaper reviews. INSCRIBED AND SIGNED by the Author on ffep -- "To my devoted friend / Mary Coleman Jennings / In appreciation of my high / esteem for her father, her / husband and herself. / From / John Hays Hammond / March 1935." OCLC 472245289 John Hays Hammond (1855 – 1936), a mining engineer, diplomat, and philanthropist. He was raised in the Gold Rush days of San Francisco in which his father R. P. Hammond and his father's close friend William P. Coleman played significant roles. John Hays Hammond took his first mining job as a special expert for the US Geological Survey 1879-1880 in Washington, DC. He returned to California in 1881 to work for Senator Hearst, the mining magnate and father of William Randolph Hearst. In 1882, he was sent to hostile country in Mexico, near Sonora, to become superintendent of Minas Nuevas. When a revolution broken out, Hammond barricaded his family in a small house and fought off the attacking guerrillas until they were able to return to San Francisco. After several years in San Francisco, Hammond and his family went to South Africa where he was eventually put in charge of Cecil Rhodes' gold and diamond mines, achieving great financial success. Spurred on by Rhodes, Hammond and some other American and British immigrants formed a Reform Committee, demanding that President Paul Kruger establish a stable constitution, a fair franchise law, an independent judiciary, and a better educational system. Prematurely launching an invasion of the Transvaal with some 1500 troops, the leaders of the Reform Committee were captured by the Boers in the ill-fated Jameson Raid in December 1895. Hammond and the other leaders of the Johannesburg Reform Committee were sentenced to death; however, President Kruger soon commuted their sentences, and the Reform Committee leaders were released after paying large fines. Hammond returned to the United States forthwith. His colleague Hennen Jennings [and fellow Rand Baron] and his wife Mary L. Coleman Jennings [daughter ofJohn C. Coleman, a California gold mining pioneer] remained in South Africa until 1905. The families remained good friends well into the 20th century. Contents of this book include: Heritage of a Californian; Boy on the Frontier; In Pursuit of an Education; Training an Engineer; Bottom of the Ladder; Gold; Old Mexico; Insurrectos and Indians; Far Places; All in the Days Work; Grass Valley and the Coeur D'Alene; Call to Africa; Empire Builder; Winning of Rhodesia; Trekking through Matabeleland; Deep-Level Mining; Reform Movement; Revold of the Uitlanders; The Trial PROVENANCE - Mrs. Mary Coleman Jennings, wife of James Hennen Jennings (1854-1920), a mining engineer, born at Hawesville, KY. After attending private schools in London and Derbyshire, England, Jennings returned to Kentucky and set up a lumber business, but soon wanted to further his engineeering education. He graduated from the Lawrence Scientific School of Harvard University in 1877 with the degree C.E. Jennings then headed West and worked in gold and quicksilver mines in California for the next ten years. In 1887 he went to Venezuela for another mining job. Finally, his talents as an innovative mining engineer, took him to South Africa. During 1889-1905 he was consulting engineer of H. Eckstein, in Johannesburg, and Wemher Beit, in London. Jennings was chiefly responsible for thr fevelopment and expansions of their mines, employing the most technologically advanced methods and equipment available in the day. In the rough and tumble of South Africa, he managed to keep out of John Hays Hammond's conspiracy to overthrow Kruger's government and to earn a fortune (the equivalent of about 10 million pounds in 2014) before he returned to America in 1905. ; Signed by Author