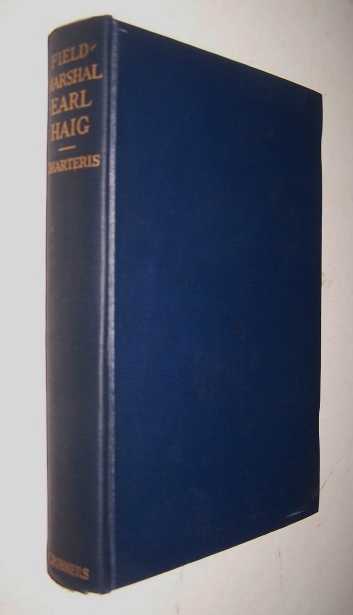 xii, (2), 407 pages; Clean and secure in original blue cloth binding with gilt lettering at spine. Former owner's name on first blank (after map endpapers) -- "M. L. Jennings / from H. H. /May 1929" - Mary L. Coleman Jennings. Field Marshal Douglas Haig, 1st Earl Haig, (1861 – 1928) was a senior officer of the British Army. Having served in South Africa and India, Haig then commanded the British Expeditionary Force (BEF) during the First World War, on the Western Front from late 1915 until the end of the war. He was commander during the Battle of the Somme, the Battle of Arras, the Third Battle of Ypres (Passchendaele), the German Spring Offensive, and the final Hundred Days Offensive. Although he had gained a favourable reputation during the immediate post-war years, with his funeral becoming a day of national mourning, Haig has, since the 1960s, become an object of criticism for his leadership during the First World War. He was nicknamed "Butcher Haig" for the two million British casualties endured under his command. On the other hand, some historians consider the Hundred Days Offensive of 1918 - the joint allied effort led by Foch that ended the war - and the British contribution to it, to be one of the greatest victories ever achieved in British military history. The AUTHOR Brigadier General John Charteris (1877–1946), was a captain at the start of World War I, was appointed an Aide-de-Camp to Haig, whom he accompanied to France with the British Expeditionary Force (B.E.F.) in August 1914. By September 1914 Haig issued him with an order to establish an Intelligence Office in I Corps Head Quarters, Haig's Command, with the aim of providing operational information on the activities of the Imperial German Army. In December 1915 Haig was appointed Commander-in-Chief , where Charteris was of the B.E.F.'s General Head Quarters, and Charteris was promoted to the rank of brigadier-general at 38 years of age. Provenance: Mary Coleman Jennings was the wife of James Hennen Jennings (1854-1920), a mining engineer, born at Hawesville, KY. After attending private schools in London and Derbyshire, England, Jennings returned to Kentucky and set up a lumber business, but soon wanted to further his engineeering education. He graduated from the Lawrence Scientific School of Harvard University in 1877 with the degree C.E. Jennings then headed West and worked in gold and quicksilver mines in California for the next ten years. In 1887 he went to Venezuela for another mining job. Finally, his talents as an innovative mining engineer, took him to South Africa. During 1889-1905 he was consulting engineer of H. Eckstein, in Johannesburg, and Wemher Beit, in London. Jennings was chiefly responsible for thr fevelopment and expansions of their mines, employing the most technologically advanced methods and equipment available in the day. In the rough and tumble of South Africa, he managed to keep out of John Hays Hammond's conspiracy to overthrow Kruger's government and to earn a fortune (the equivalent of about 10 million pounds in 2014) before he returned to America in 1905.