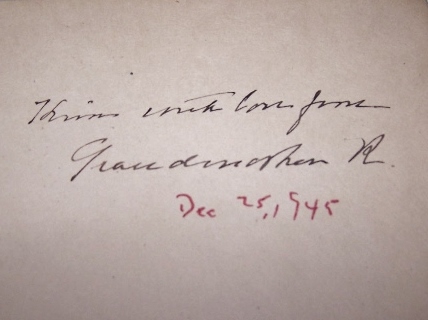 236 pages; Inscribed on ffep "Kim [Roosevelt] with love from / Grandmother R. / Dec 25, 1945" Clean and tight in original black cloth binding in poor dustjacket missing large sections, now in protective mylar cover. This book was inscribed by Edith Carow Roosevelt (1861 1948) to her grandson Kermit "Kim" Roosevelt, Jr. (1916 - 2000). Edith Carow Roosevelt was the second wife of President Theodore Roosevelt and served as First Lady of the United States during his presidency from 1901 to 1909. She hired McKim, Mead & White to undertake a renovation of the White House and instigated the creation of an official White House staff; her formal dinners and ceremonies elevated the position of First Lady. Kermit "Kim" Roosevelt, Jr. (1916 - 2000) was the grandson of President Theodore Roosevelt. He was a career intelligence officer who served in the Office of Strategic Services and was the mastermind of the Central Intelligence Agency's Operation Ajax, which orchestrated the coup against Iran's democratically-elected Mohammed Mossadegh administration, and returned Mohammad Reza Pahlavi, the Shah of Iran, to Iran's Peacock Throne in August 1953 for the purpose of returning Western control of Middle Eastern oil supplies. Just after the war, Roosevelt went on to serve on the advisory board of the largely Arab organization, The Institute of Arab American Affairs (IAAA, 19441950) In Egypt under Allen Dulles, Kim Roosevelt supervised the CIA's operation to undermine the popular General Neguib and encourage the rise to power of Gamul Abdul Nasser. Even before his decisive victory, Nasser was communicating through Roosevelt to make a settlement with Great Britain. These back channel negotiations eventually produced the treaty signed in October 1954. Nasser ascended and for the next decade Egypt's relations with the West moved along a sometimes rocky road. By 1965 relations had significantly deteriorated and Nasser was quite worried the CIA was plotting to assassinate him. After the Odell-Amin case broke, the CIA began to look for "more West friendly" Egyptian elements. Their attention landed on the Muslim Brotherhood, which according to Talcott Seelye, "We thought of Islam as a counterweight to communism. We saw it as a moderate force, and a positive one." In fact the CIA was spending millions of dollars on anti-Nasser operations, including an extensive propaganda campaign. ; Experience the pleasure of reading and appreciating this actual printed item. It has its own physical history that imbues it with a character lacking in ephemeral electronic renderings.