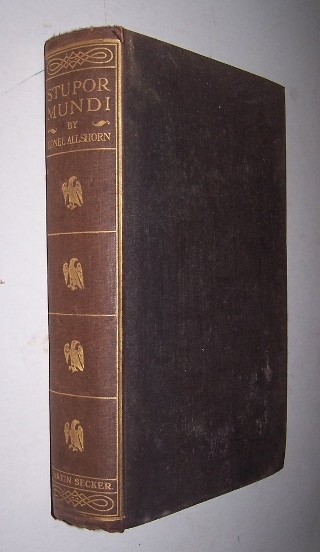 STUPOR MUNDI The Life and Times of Frederick II, Emperor of the Romans, King of Sicily and Jerusalem, 1194-1250

318 pages; Former owner's name neatly on endpaper, otherwise unmarked and secure in original gray cloth binding with gilt lettering and decoration at spine; scattered foxing. Engraved portrait frontispiece with tissue guard of a medallion with Frederick II's profile; eight additional illustrated plates. Frederick II (1194 1250) was King of Sicily from 1198, King of Germany from 1212, King of Italy and Holy Roman Emperor from 1220 and King of Jerusalem from 1225. His political and cultural ambitions were enormous as he ruled a vast area, beginning with Sicily and stretching through Italy all the way north to Germany. As the Crusades progressed, he acquired control of Jerusalem and styled himself its king. However, the Papacy became his enemy, and it eventually prevailed. Viewing himself as a direct successor to the Roman emperors of antiquity, he was Emperor of the Romans from his papal coronation in 1220 until his death; he was also a claimant to the title of King of the Romans from 1212 and unopposed holder of that monarchy from 1215. As such, he was King of Germany, of Italy, and of Burgundy. At the age of three, he was crowned King of Sicily as a co-ruler with his mother, Constance of Hauteville, the daughter of Roger II of Sicily. His other royal title was King of Jerusalem by virtue of marriage and his connection with the Sixth Crusade. He was excommunicated three times and often vilified in pro-papal chronicles of the time and after. Pope Gregory IX went so far as to call him an Antichrist. Speaking six languages (Latin, Sicilian, Middle High German, Langues d'ol, Greek and Arabic[3]), Frederick was an avid patron of science and the arts. He played a major role in promoting literature through the Sicilian School of poetry.

Title: STUPOR MUNDI The Life and Times of Frederick II, Emperor of the Romans, King of Sicily and Jerusalem, 1194-1250

STUPOR MUNDI The Life and Times of Frederick II, Emperor of the Romans, King of Sicily and Jerusalem, 1194-1250