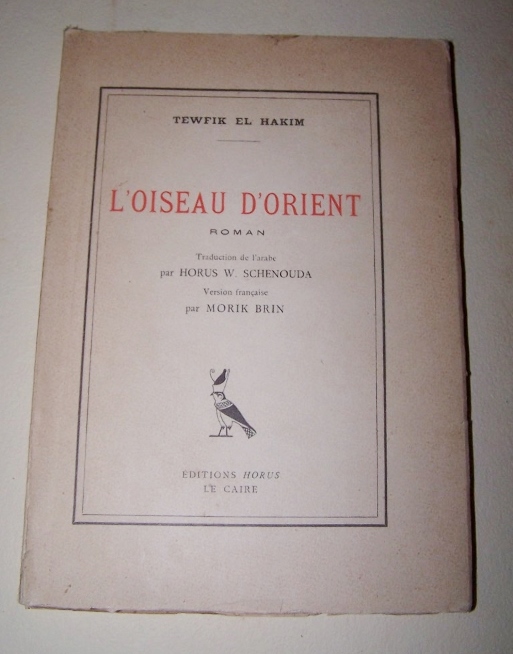 156, (1) pages; Contents clean and secure in original printed wrappers. Minor chipping to wrappers at bottom of spine, edge. Pages unopened. OCLC 313627523 Traduction de l'arabe par Horus W Schenouda; Version francaise par Morik Brin. Tawfiq al-Hakim or Tawfik el-Hakim (1898 1987) was a prominent Egyptian writer and visionary. He is one of the pioneers of the Arabic novel and drama. The triumphs and failures that are represented by the reception of his enormous output of plays are emblematic of the issues that have confronted the Egyptian drama genre as it has endeavored to adapt its complex modes of communication to Egyptian society. Tawfiq Ismail al-Hakim was born October 9, 1898, in Alexandria, Egypt, to an Egyptian father and Turkish mother. Tawfiq al-Hakim moved to Cairo with his uncles to continue his studies at Muhammad Ali secondary school. After studying in Cairo, he moved to Paris, where he graduated in law and began preparing a PhD thesis at the Sorbonne. However, his attention turned increasingly to the Paris theatres and the Opera and, after three years in Paris, he abandoned his studies and returned to Egypt in 1928, full of ideas for transforming Egyptian theatre. "The real importance of Usfour min al-Sharq is Muhsins dialogue with the Parisians, Suzie, Andre, and Ivanovich. Many Arabs have identified with Muhsin and his struggle to come to grips with the west and face his own culture squarely. Hakim was dealing with a problem of identity, which the Middle East was and still is in the process of debating." [Hoppe, Novels of Tawfiq al-Hakim].