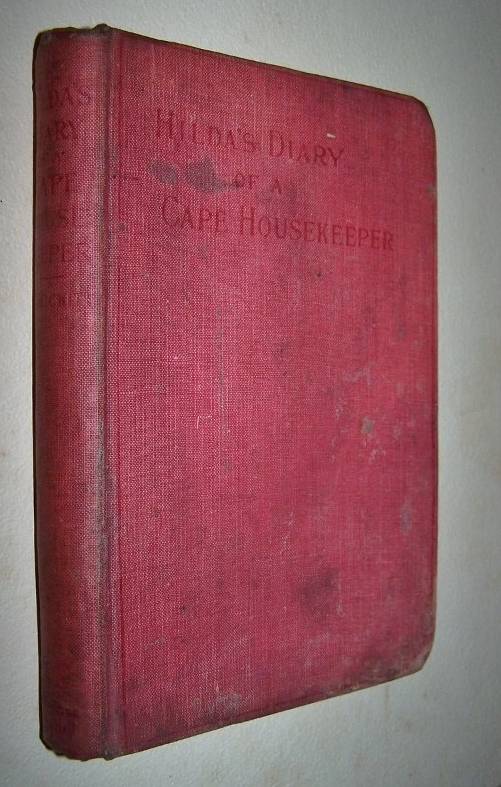 HILDA'S DIARY OF A CAPE HOUSEKEEPER Being a Chronicle of Daily Events and Monthly Work in a Cape Household, with Numerous Cooking Recipes, and Notes on Gardening, Poultry Keeping, etc.

Contents clean and secure in original light red cloth binding; binding has general soiling and strip of color loss at bottom of rear board; former owner's name on rear endpaper "Margaret Scriber" and title copied out in ink on half-title, otherwise unmarked. Frontispiece drawing of Hilda's house in the Cape; text illustration of humanely killing a crab.. In addition to dozens of recipes, Hilda provides guidance on how to raise poultry, trating animals kindly and human ways to kill lobsters, crab, rabbits and poultry. There is another section on home remedies, locust destruction, other agricultural and animal husbandry notes for Natal, Transvaal, etc. A fascinating volume published during the gold boom at the turn of the last century in South Africa. Though not marked as such, this volume came from the collection of the Hennen Jennings family. James Hennen Jennings (1854-1920), a mining engineer, born at Hawesville, KY. After attending private schools in London and Derbyshire, England, Jennings returned to Kentucky and set up a lumber business, but soon wanted to further his engineeering education. He graduated from the Lawrence Scientific School of Harvard University in 1877 with the degree C.E. Jennings then headed West and worked in gold and quicksilver mines in California for the next ten years. In 1887 he went to Venezuela for another mining job. Finally, his talents as an innovative mining engineer, took him to South Africa. During 1889-1905 he was consulting engineer of H. Eckstein, in Johannesburg, and Wemher Beit, in London. Jennings was chiefly responsible for the development and expansion of their mines, employing the most technologically advanced methods and equipment available in the day. In the rough and tumble of South Africa, he managed to keep out of John Hays Hammond's conspiracy to overthrow Kruger's government and to earn a fortune (the equivalent of about 10 million pounds in 2014 dollars) before he returned to America in 1905.

Title: HILDA'S DIARY OF A CAPE HOUSEKEEPER Being a Chronicle of Daily Events and Monthly Work in a Cape Household, with Numerous Cooking Recipes, and Notes on Gardening, Poultry Keeping, etc.

HILDA'S DIARY OF A CAPE HOUSEKEEPER Being a Chronicle of Daily Events and Monthly Work in a Cape Household, with Numerous Cooking Recipes, and Notes on Gardening, Poultry Keeping, etc.